Tell Senators to oppose Wheeler for the EPA 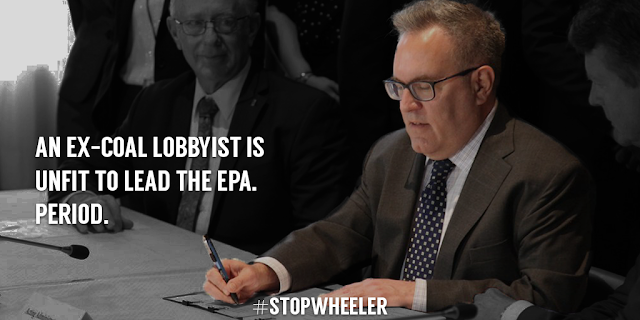 This week, President Trump officially nominated Andrew Wheeler to be the Administrator or the Environmental Protection Agency (EPA), and Senate Republicans are trying to rush a hearing on his nomination next week even though the federal government, including the EPA, is still shutdown.

As Acting Administrator, Wheeler has already done the bidding of corporate polluters, proposing new rules that allow cars, trucks, power plants, and industrial facilities to emit more pollution and. We can't let Wheeler's nomination coast through, especially when the government is shutdown, and Superfund sites go uncleaned, and our air and water is at risk.

Tell your senators to oppose Andrew Wheeler's nomination to Administrator of the EPA!

What has Wheeler done as Acting Administrator? He gutted the coal ash rule, clean car standards, methane standards, and is putting forward a Dirty Power Plan that the EPA's own analysis says will cause an additional 1,400 deaths each year due to more pollution.

He is also pushing plans to ruin the lifesaving Mercury and Air Toxics Standards, opening the door to more toxic mercury and particulate matter pollution from coal plants and jeopardizing the health of women and children. Wheeler';s proposal ignores the massive reductions in toxic pollution brought by these standards and the up to 11,000 lives saved and approximately 130,000 asthma attacks avoided per year as a result of this protection.

Furthermore, Wheeler is pushing to redefine which U.S. waterways are covered by the Clean Water Act, putting drinking water for one in three Americans at risk.

Andrew Wheeler is clearly unfit to oversee the agency that was created to protect our air, water, and climate. We must oppose his nomination.

Wheeler shows the same signs of ethical misconduct as Scott Pruitt, disregarding ethics and conflict of interest concerns while meeting with big polluters and pushing their dirty policies at the expense of our health and environment. As if that weren't enough, Wheeler, like his ousted predecessor, Pruitt, has seen his share of scandal. Wheeler has shared and liked racist posts on social media and engaged with right-wing trolls and conspiracy theorists.

Senate Republicans confirming Andrew Wheeler to lead the EPA is just like putting the Hamburglar in charge of McDonald's, because he will do nothing to protect the health of the public and everything to enrich corporate polluters.

We can't let a coal lobbyist doing the bidding of corporate polluters lead the EPA.Tell your senators to oppose his nomination!

- Melinda Pierce, Sierra Club
Posted by Jana Segal at 7:59 AM