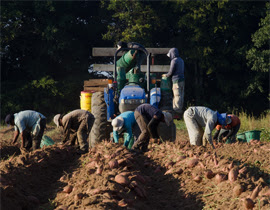 A recent wave of immigration arrests has vocal farmers and farmworker activists concerned that they will face retaliation for daring to speak out against harsh anti-immigration policies.1  A New York Farm Bureau spokesperson said that some farmworkers are even afraid to leave the farms on which they live and work.2

It's bad enough that farmworkers lack the basic workplace protections and labor rights that most American workers enjoy. Many are exposed to pesticides and victimized by wage theft; now they have to face the persistent terror of deportation.

Without immigrants, the agricultural sector would collapse. Put immigration enforcers on notice that we won't stand for the targeting of peaceful farmworkers and outspoken farmers.

A new report shows that deporting every undocumented immigrant in New York would decrease the state's agricultural output by 24 percent and reduce overall economic activity by $8.5 billion.3

And that's just one state! Extrapolate that across the nation and you've got a serious threat to our economy and our food security. Stand up for farmworkers and farmers: get immigration agents off their backs.

The recent spike in immigration arrests also jeopardizes the environment. Without migrant farmworkers, monoculture and development would run roughshod over our agricultural landscape.

Farmers would likely switch from labor-intensive fruits and vegetables to highly-mechanized commodity crops like corn and soybeans.2 Or they may get out of the agricultural game entirely, converting their land to other interests, like housing developments.3

If farmers pivot to overused crops, they will need to clear more land and till more soil. This drives erosion and deteriorates soil and water quality.4 With increased monoculture comes less biodiversity, harming wild plants and animals. Pollinator health in particular could be compromised.

In it together,
The SierraRise team