Tell your senators: Reject any budget that endangers the Arctic Refuge! 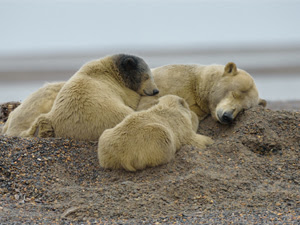 It’s no secret that the Trump administration will stop at nothing—not even the law—to open up the Arctic National Wildlife Refuge to drilling.

A leaked memo reveals that the Trump administration wants to change existing law to allow the use of seismic blasts and underground shock waves to explore for oil in the Coastal Plain of the Arctic National Wildlife Refuge—its biological heart—and now it is trying to get Congress to open the Refuge to drilling.

The single time that oil exploration was allowed in the past, seismic equipment scarred the beautiful landscape of the Coastal Plain for decades. If allowed again, this activity could also be harmful to wildlife such as denning polar bears.

The Coastal Plain of the Arctic National Wildlife Refuge is home to hundreds of iconic species, including caribou, polar bears, Arctic foxes, and migratory birds from all 50 states. The indigenous Gwich’in people—whose way of life has for millennia depended on the caribou that calve there each summer—call the 1.5 million acre Coastal Plain the “sacred place where life begins.”

For decades, the Arctic Refuge has been at the center of a political tug-of-war between those who want it protected permanently and others pushing to open it for fossil fuel development. Yet each time drilling proponents have tried to open up the Coastal Plain, they’ve failed. That’s because the majority of Americans want this special place permanently protected as wilderness.

The Refuge now faces another threat from President Trump: in a backdoor attempt to subvert the will of the American public, he has proposed a budget that calls on Congress to raise revenue by drilling on the Coastal Plain—and now some members of Congress have added a provision in this year’s budget to make this happen. Write your members of Congress now to urge them to keep the Arctic Refuge out of the budget process.

Drilling in the Arctic Refuge should be excluded from any budget proposal. It is irresponsible to put such a dangerous provision in legislation that should be used to fund the agencies and programs that protect our air, water, health and climate. We cannot and should not play politics with our national heritage, just to line the pockets of the oil and gas industry.

Please send a clear message to Congress: Reject any budget that recklessly endangers the Arctic Refuge!
Posted by Jana Segal at 4:25 PM