Call your Senators now. Tell them to vote NO on torture promoter Steven Bradbury! 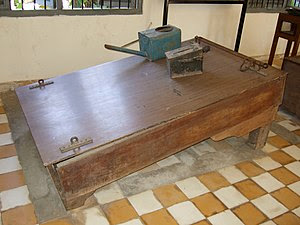 The full Senate will vote TONIGHT on whether to confirm a key architect of the Bush administration's illegal torture programs as a top lawyer in the government.
Steven Bradbury gave the legal thumbs-up to abuses from waterboarding to physically striking prisoners, stripping them naked, and depriving them of sleep for more than 7 days.
Is that the type of man who should be allowed back into a position of power in the U.S. government? Absolutely not.
This vote will be close and we've got a chance to win. Last week, Republican Sen. John McCain announced he would oppose any Trump nominee who backs the use of torture. It will take a united Democratic Party and 1 or 2 more Republicans to reject this pro-torture nominee.
Call your senator, Jeff Flake, at (202) 224-4521. Tell him this torture-affirming extremist CANNOT be trusted inside the government.
(I couldn't reach a staff member there. I reached one at the Tucson office at: 520-575-8633. You can also try the Phoenix office at: 602-840-1891)

Here’s what you can say:
"Hi, I’m a constituent in [YOUR TOWN]. It’s deeply troubling that an architect of illegal torture programs under George Bush was nominated to become a top lawyer in the Trump administration.
"Promoting torture is a disqualifying abuse of the public trust. Please vote NO on Steven Bradbury’s nomination to become General Counsel at the Transportation Department."

During his time inside the Bush administration, Steven Bradbury wrote or signed off on four memos that OK'd torture. He even concluded that the Geneva Convention – accepted by governments worldwide – did not apply.
His legal analysis was so bad that even Bush’s Justice Department ultimately withdrew Bradbury’s memos amid "serious concerns about some of his analysis."
Trump probably wants his top lawyers to believe that the executive branch has almost limitless powers, but that’s deeply dangerous. And he might think the public won’t notice if he sneaks Bradbury into an agency mostly unrelated to his prior work.
We can’t let that happen.
The Senate already blocked Bradbury back in 2008 from leading the Office of Legal Counsel because of similar concerns with his role in torture, surveillance, and whether he could be independent of the White House.
The Senate needs to block him again and make sure torture promoter Steven Bradbury is never allowed in government.
- Reuben, Demand Progress
Source:
1. Department of Justice Office of Professional Responsibility, “Investigation into the Office of Legal Counsel's Memoranda Concerning Issues Relating to the Central Intelligence Agency's Use of "Enhanced Interrogation Techniques" on Suspected Terrorists,” July 29, 2009.
Posted by Jana Segal at 1:05 PM