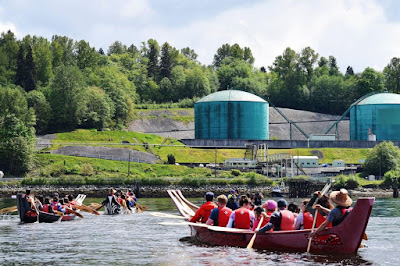 Great news -- Canada's Federal Court of Appeal just sided with First Nations and quashed the approval of the Trans Mountain pipeline expansion project -- a.k.a. the Kinder Morgan Pipeline. This is a HUGE victory for Indigenous rights and our planet!

The courts have spoken: there was inadequate consultation with Indigenous nations on the Trans Mountain pipeline.

Now it’s time for Prime Minister Trudeau to honor the decision of the courts and finally put an end to this destructive tar sands oil pipeline expansion project.

This victory is due to years of work by Indigenous leaders. And, in this critical time of reconciliation in Canada, honouring the court’s decision is more important than ever.

Trudeau campaigned on a platform of improving relations with Indigenous nations. It’s time he lived up to those promises and stopped this disastrous pipeline.

'Victory for all of us': Federal Court of Appeal quashes approval of $9.3-billion oil pipeline expansion
Posted by Jana Segal at 7:29 PM