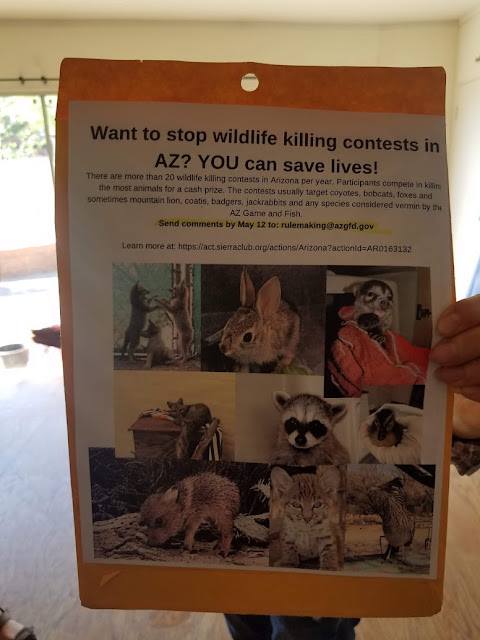 The Arizona Game and Fish Commission is accepting public comment on a proposed rule to ban wildlife killing contests and the commissioners need to hear from you! Please send a message letting them know you support this rule and that you would like to see it strengthened to close loopholes. Wildlife killing contests are unethical, wasteful, and devalue our wildlife, plus have no scientific or wildlife management role.

There are more than 20 wildlife killing contests held each year in Arizona. The participants join in the contest for a fee and then they spend the weekend killing as many animals as they can for a cash prize. The target species are usually one or more of the following animals; coyotes, bobcats, foxes and sometimes mountain lion, coati mundi, badgers, and jackrabbits. They get points for the different animals killed and the most animals killed and sometimes win other prizes. Frequently, the animals are dumped after the contest is over.

Please contact Game and Fish and support banning these killing contests. You can use the message we have provided, and if possible, add your own story and tell them why you care. You can also send your comments to:

(Consider personalizing it for more impact.)

I support the Arizona Game and Fish Commission rule to ban wildlife killing contests and encourage you to close loopholes in the rule to ensure that these contests are not lawful in Arizona.

These killing contest are not hunting, so banning them in no way infringes on the rights of hunters. The contests do promote wanton destruction of wildlife, provide no wildlife management tool, and have no basis in science.

Wildlife killing contests are a danger on our public lands - contests encourage many teams of people with guns and powerful spotting scopes to go out and kill a lot of animals in a short period of time in a particular area. This puts other people and domestic animals at risk if they happen to be out recreating in the area of the killing contests.

These contests can also put nontarget species of wildlife at risk. For example, an uncollared Mexican wolf might be mistaken for coyote in the rush to get the biggest and the most.

I encourage you to amend the rule to limit sponsorship of these contests and to include nongame wildlife and prairie dogs, so those organizing these wildlife killing contests do not merely switch their targets.

Please fulfill your public trust responsibilities to the people of Arizona relative to our wildlife and stop these killing contests now.

Thank you for your consideration.

A Death Of Ethics: Is Hunting Destroying Itself? - Mountain Journal
Posted by Jana Segal at 11:51 AM