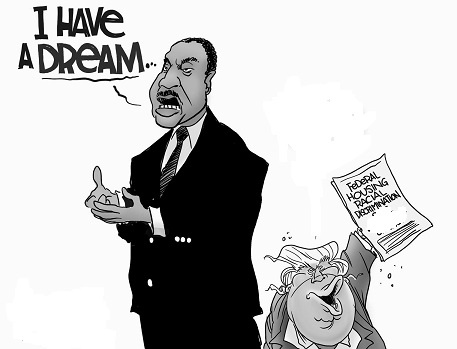 FAIR HOUSING FOR ALL

In the aftermath of Martin Luther King, Jr.'s assassination, Congress passed the Fair Housing Act with broad, bipartisan support in an effort to curtail widespread segregation and discrimination in housing. It is one of the most critical pieces of legislation advancing racial and gender equality. Now, due to a new rule proposed by the Department of Housing and Urban Development, the Fair Housing Act is at risk of losing critical protections.
At stake is the Disparate Impact protection, which says that banks, landlords, and other housing providers should choose policies that apply fairly to all people. The Disparate Impact rule allows us to recognize and prevent unjustified policies that may appear neutral in theory but disproportionately harm certain groups of people – and ensures that everyone can be treated fairly.
Losing critical housing protections is in the interest of no one but big corporations seeking to benefit from imposing discriminatory policies.
If HUD succeeds in eliminating this protection, we could see the following repercussions:
Corporate profits should not outweigh our national interest in promoting diversity or our values of equal opportunity.
HUD is accepting public comments on the proposed rule until October 18. That means we have just weeks to fight the rule and show the government that we, the people, demand they protect us – not corporations.

(Consider personalizing it for more impact.)

Withdraw the proposed rule gutting protections against housing discrimination. If implemented, the rule will jeopardize housing access for people of color, survivors of domestic violence, people with disabilities, and many more.