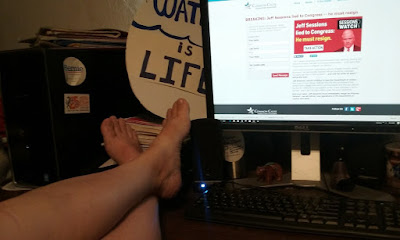 This is deeply disturbing and unprecedented news. Attorney General Jeff Sessions secretly met with the Russian ambassador -- at the same time Russia was trying to influence our election.

Even worse, during his confirmation process, multiple senators asked Sessions if he had met with Russian officials during the campaign. Sessions said flat out that he hadn’t -- and now we know he wasn’t telling the truth.

Jeff Sessions cannot continue to lead the Department of Justice. One senior Trump official, National Security Advisor Michael Flynn, already had to resign over secret communications with Russian officials. But the DOJ will oversee investigation of the Trump campaign’s ties to Russia -- and it can’t do that credibly under Sessions’ leadership.

Add your name: Jeff Sessions must immediately resign as Attorney General -- we will deliver your signatures to the Department of Justice next week.

Copied from petition from Common Cause whose purpose is to hold power accountable.

This goes beyond politics. Rep. Darrell Issa (R-CA), the former House Oversight Committee Chair, called for a special prosecutor on Real Time with Bill Maher. Issa stated that Attorney General Jeff Sessions (a political appointee who campaigned for Trump) should not be in charge. According to Issa, Putin is "a bad guy who murders people, who runs a gas station with an economy the size of Italy."2

Russia is a classic case of what happens when a fossil fuel oligarchy combines with authoritarian politics. As democracy withers, civil rights and environmental protections collapse. We cannot let that same regression happen here.

Defending American ideals against foreign intrusion is patriotic, and members of Congress from both sides have called for congressional investigations.3 It's harder to find a senator who doesn't think the issue should be looked into.

However, it was just revealed that the White House has enlisted the chairs of the House and Senate intelligence committees to defend the Trump administration in the media.4 A clear majority of the Senate is concerned with Putin's influence, but it's unclear if anything will happen if they think people will forget and move on.

Democracy requires transparency and vigilance -- and protecting our environment requires a functioning democracy. Will you stand up for American values and demand an independent investigation into claims of Russian interference?