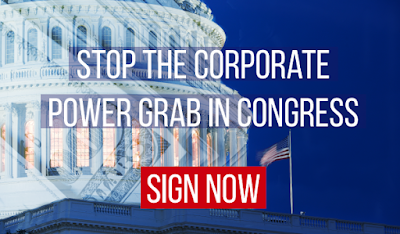 Republicans in Congress are aiding and abetting a corporate power grab that would allow corporate interests to take hold of our democracy at the expense of everyday people.
The package of three dangerous bills has already passed the House and is on its way to the Senate. If the Senate approves, Donald Trump will certainly sign them — preventing key agencies from fulfilling their crucial missions to protect Americans, and rolling back vital health protections. We need you to stop this from happening.
Sign the petition: Stop the corporate power grab in Congress»
Urge your senators to reject the "Regulatory Accountability" Act, the REINS Act, and the "Midnight Rules Relief" Act.
The so-called "Regulatory Accountability" Act would block crucial protections Americans rely on for their health and safety: rules to protect our air and water from corporate polluters, workplace safety requirements, food safety measures, and sensible Wall Street regulations that protect middle-class families from the irresponsible behavior that caused the last recession.
The REINS Act would prevent federal agencies from putting in place life-saving standards that keep Americans safe. Critical, commonsense updates to everything from clean air standards to overtime rules could be completely tied up in red tape — indefinitely.
Finally, with the "Midnight Rules Relief" Act, Congress could kill vital safeguards that President Obama provided in his final year as President. This includes actions like providing school breakfast to children, implementing life-saving ozone pollution standards, and limiting methane pollution from oil and gas wells on public lands.
President Trump and Republicans in Congress want to diminish our voices and prevent us from truly having a say in our own democracy, which is why we’re working with our partners including Daily Kos, NextGen Climate, and SumofUs to stop them. We need you to speak out NOW against this power grab and support democracy for all Americans.
Join us and sign the petition against the corporate power grab in Congress TODAY»
Thank you for being such a strong activist against corporate interests interfering in politics.
-- Katie O'Connell, People for the American Way
Posted by Jana Segal at 11:07 AM