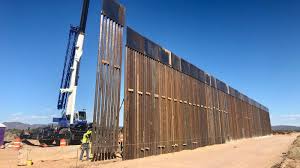 Today, the Texas Civil Rights Project sent a letter to the Departments of Homeland Security, Justice, and Defense demanding that they halt all border wall construction to save lives during the pandemic.  They were joined in this letter by over 100+ groups, spanning environmental, immigration, civil rights, and faith-based organizations among others. See the press release below!

Sign this petition to stop construction now and keep border residents safe from this administration!

To view this discussion on the web:

In the last week, the federal government has filed new condemnations and a motion for immediate possession, arguing that they need access to landowners’ property urgently, to send surveyors and contractors to their house in the middle of the COVID-19 pandemic. In eminent domain cases such as these, the government sues the landowner for rights to their land.

“These takings are directly affecting people’s homes,” said Efrén Olivares, the Legal Director of the Racial and Economic Justice Program at the Texas Civil Rights Project, who represents landowners in the path of the border wall. “These clients live on this land. They want to send contractors to come in and take their homes while we’re supposed to be sheltering in place. It’s unbelievable.”

One of the landowners sued by the government last week is over 70, and another, Nayda Alvarez, has been sick multiple times this year. The Texas Civil Rights Project represents these landowners jointly with the ACLU of Texas.

“There has been no transparency and we have been intimidated by the government to sign over rights to our land,” said Alvarez, a teacher whose family has lived in Starr County for five generations. “We have been talked down to by government officials who think we are not aware of our rights.” Alvarez painted “No Border Wall” on the roof of her house in protest.

“When my mother was on her deathbed, government officials continued to call and were still asking us to sign over our land. I had to remind them that my mother was dying of cancer in order to stop the calls.”

“How can border residents meaningfully and thoughtfully engage in eminent domain processes in a crisis like this?” said Norma Herrera, community organizer for the Rio Grande Valley Equal Voice Network. “They’re taking advantage.”

Nearly 68,500 cases of COVID-19 have been confirmed across the country, including 994 fatalities. In many of the counties where border wall construction is ongoing, local governments have issued emergency declarations, in accordance with guidance from federal and state public health authorities, banning gatherings of ten or more individuals. California, for example, is now under statewide orders to “shelter in place” at home.

“In the border communities we represent, these extraordinary actions by the federal government are quite literally endangering the lives of border residents,” said Tricia Cortez, Executive Director of the Rio Grande International Study Center.

“Instead of constructing barriers, the Army Corps of Engineers should use its limited resources to fight the pandemic,” said Vicki B. Gaubeca, Director of the Southern Border Communities Coalition, who are signees of the letter. “Untold lives could be saved if they would hurry and build hospitals or clinics instead.”
Posted by Jana Segal at 3:15 PM