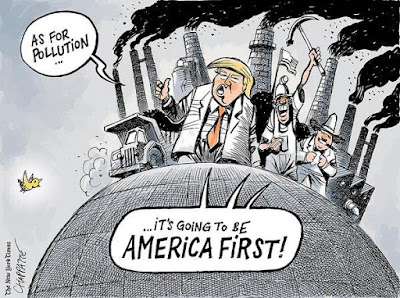 We only have until October 31 to submit comments on this outrageous proposal. Tell the EPA to stop the Dirty Power Scam.

The administration’s own analysis found that the Clean Power Plan could prevent as many as 4,500 early deaths each year by 2030 and provide up to $54 billion in health and climate benefits. It also encourages investment in cleaner, safer energy sources like wind and solar, which already employ three times as many Americans as every fossil fuel industry combined.

Despite overwhelming evidence of the devastating effects of burning fossil fuels, and broad public support for the Clean Power Plan, Donald Trump and Acting EPA Administrator Andrew Wheeler are attempting to turn back the clock on its protections. Instead of safeguarding our health, they want to protect corporate polluters.

Time is running out to take meaningful action on climate change. For the sake of our planet, and for this and future generations, we must stop Trump and Wheeler from overturning the Clean Power Plan.

It’s time to mobilize to stop this giveaway to Trump’s greedy dirty industry allies. Tell the EPA we want clean, renewable energy that will help stop climate change, not the Dirty Power Scam.

(Please, add a personalized paragraph so they don't disregard it as a form letter.)

I urge you to reject the Dirty Power Scam -- the Trump administration’s proposal to replace the Obama-era Clean Power Plan with a scheme that benefits big polluters. Instead of taking the lead on clean energy solutions and combating climate change, the United States has been lagging behind, and worse, is now signaling an about-face. This is unacceptable.

As you know, the Clean Power Plan placed the first limits on the carbon pollution responsible for climate change from the electric power sector – one of the worst contributors. Forgoing carbon limits puts public health at risk and puts the U.S. economy behind other nations that are embracing clean energy alternatives. Your own estimates indicate that the plan will prevent 4,500 early deaths each year by 2030 and generate $54 billion in climate and health benefits.

Fighting climate change, improving public health, and boosting our economy go hand in hand. The Dirty Power Scam would do nothing to solve climate change: It’s nothing more than an ill-fated and desperate attempt to bailout greedy corporate polluters.

Again, I urge you to shelve the Dirty Power Scam or any other effort that seeks to backtrack on or stall the Clean Power Plan. Thank you for considering my views.

We only have until October 31 to submit comments on this outrageous proposal. Tell the EPA to stop the Dirty Power Scam.
Posted by Jana Segal at 10:28 AM