TAKE ACTION! The Trump Administration wants to mine our national monuments before our day in court 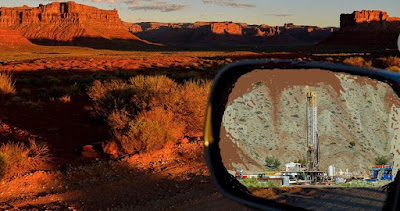 Last December, President Trump flew to Utah and issued an order to strip protections from millions of acres in Bears Ears and Grand Staircase Escalante national monuments. It was a dark day for public lands in this country. The administration is currently scrambling to take advantage of Trump’s unlawful order, developing new plans to open these lands up to coal and uranium mining before Americans can have their day in court to protect the monuments.

These lands belong to the public, not to coal and uranium companies that want to plunder their resources, leaving devastation in their wake. The Department of the Interior is taking public comments now — tell the Trump administration that these lands aren’t up for grabs.

Bears Ears and Grand Staircase are unique wonderlands. Bears Ears contains ancient cliff dwellings, kivas, and priceless petroglyphs, while Grand Staircase is home to a treasure trove of fossils—more than a dozen new dinosaur species have been discovered there since the monument was established.

Trump’s hasty plans will allow coal, oil, and gas companies to mine and drill nearly 700,000 acres of lands that rightfully should be part of Grand Staircase Escalante National Monument. Under this “preferred plan,” extractive industries will destroy almost all of the lands unlawfully cut from Grand Staircase — all for the private profit of a few corporations. These lands are far more valuable to the local economy and the local job market if they remain protected.

Trump’s plan will also exclude the Bears Ears Tribes — the Navajo Nation, Hopi Tribe, Ute Mountain Ute Tribe, Pueblo of Zuni, and Ute Indian Tribe — from truly having a voice in the management of public lands that hold their priceless heritage.

We’re in court to protect both Bears Ears and Grand Staircase, and we’re making progress. Last month a federal judge denied the Trump administration’s efforts to move our cases to Utah, and ordered the administration to give us advance notice before it allows mining activities to disturb these special places.

Help us stop this needless destruction. Weigh in now during the public comment period for Trump’s new plans for these monuments. These lands don’t belong to coal and uranium companies — they belong to all of us.

- Heidi McIntosh, EARTHJUSTICE
Posted by Jana Segal at 10:23 AM