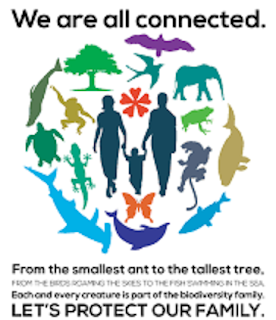 The shocking U.N. report on the severe decline of imperiled wildlife and their habitats isn’t stopping Trump from gutting critical safeguards for endangered species.

Up to one million species face extinction because of human influence — many within decades. That's the stark and urgent warning delivered in a shocking report released earlier this week by the United Nations.

If that wasn't startling enough, the U.N.'s findings also expose the scope and severity of the Trump administration's disregard for the protection of our environment and threatened species.

We must act now: Demand that President Trump and his anti-wildlife officials reverse course and act to save endangered species and their habitats — before they're gone forever.

The U.N.'s groundbreaking report draws from over 450 experts in more than 50 countries, and describes the detrimental impact of climate change, shrinking habitats, pollution, and other factors on rapidly declining animal and plant populations.

It warns of the disappearance of species we care about and rely on, like pollinators and freshwater fish ... decline in agricultural yields due to severely damaged soil ... eradication of forest ecosystems, along with all the carbon storage and wildlife home benefits they bring ... and elimination of freshwater streams that provide drinking water for our survival.

The research also shows that ecosystem collapse is a direct symptom of human activity. Yet President Trump and Interior Secretary David Bernhardt continue to push forward with plans to roll back vital protections for threatened and endangered species, including gray wolves, North Atlantic right whales, rusty patched bumble bees, and many others.

And Trump's reckless fossil fuels first policies and climate change denial are pushing so much of our wildlife even closer to the brink.

But NRDC is fighting back on multiple fronts, including going up against the Trump administration in federal court to stop these dangerous rollbacks.

And while we're battling in court, we need as many people as possible to raise their voices and generate an outcry too big for the Trump administration to ignore.

Tell Trump, Bernhardt, and the U.S. Fish and Wildlife Service: We demand you take IMMEDIATE action to stop the decline of our planet's biodiversity, and avert the extinction of endangered species.

We can still turn things around — but our window of opportunity to act is narrowing every day.

So if you, like me, cannot stand by and watch this administration go unchallenged as our biodiversity plummets ... and if you want to leave your children and grandchildren a planet that looks anything like the one we're on now ... please speak out.

We need to protect nature — or nature is going to stop protecting us. Thank you for taking action when it matters most. Over the next two weeks, we'll be in touch with more opportunities to help save wildlife before it's too late.

One million species face extinction, U.N. report says. And humans will suffer as a result - The Washington Post

Endangered Species Act stripped of key provisions in Trump administration proposal - The Washington Post
Posted by Jana Segal at 8:54 AM