Update on bills that weaken our Democracy at AZ Legislator: Call Governor to veto SB 1451 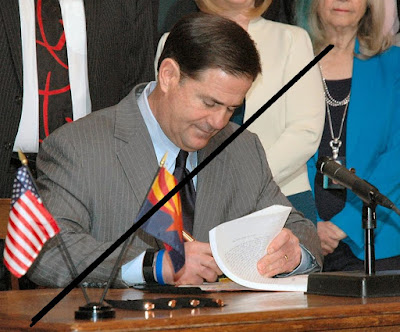 Monday night - well actually very early Tuesday morning, the first session of the 54th Legislature (FINALLY!) adjourned sine die. This session saw some egregious attacks on democracy, but also glimpses of progress and hope for expanding access to the ballot and fighting corruption. In the coming days, we'll be putting together a full analysis of democracy issues this session. For now, here are some quick updates on bills that were alive until the bitter end.
SB1451 - (Sen. Leach)
On top of the myriad rules that already exist, SB 1451 places technical requirements on paid petition circulators for initiatives. This thinly veiled attempt to make it easier to toss disqualify otherwise valid signatures passed both chambers in the waning days of session and now sits on Gov. Ducey's desk.
Contact Gov. Ducey:
Email. engage@az.gov.
Phone. Phoenix: 602.542.4331. Tucson: 520.628.6580.
Address. 1700 West Washington Street. Phoenix, Arizona 85007

HCR2005/SCR1023 - (Rep. Kavanagh + Sen. Kerr)
These bills would have referred to the 2020 ballot a question requiring statewide initiatives to hit the statewide 10% threshold in each of the 30 legislative districts - making it nearly impossible for anyone with limited resources to qualify an idea for the ballot. Thankfully, both bills failed to receive a vote in their respective chambers.

HB2616 - (Rep. Townsend)
Would have imposed unlimited civil fines of $25 per form per day and criminal penalties (up to a four-month jail sentence) on anyone who turned in a voter registration form after an arbitrary deadline. The bill failed to pass the House floor. Simply stated, we don’t think honest actors should face a potential criminal penalty for registering people to vote.
SB1188 - (Sen. Ugenti Rita)
Would purge Arizona voters off of their county's Permanent Early Voter List (PEVL) if they do not vote by mail for two consecutive election cycles. This would have taken the “permanent” out of permanent early voting, and thankfully did not receive a vote on the House floor.

If there's one thing we can say with certainty after this legislative session, it's that the job of protecting democracy is never over.
- Arizona Advocacy Network
Posted by Jana Segal at 1:10 PM