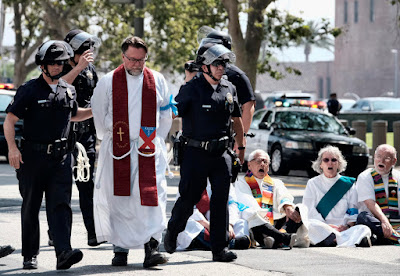 PUT ICE BACK ON ITS LEASH

We must protect both our immigrant communities and our right to dissent without retaliation.


Immigration and Customs Enforcement - the agency known as ICE - is out of control. ICE has long been a cruel engine of this country's deportation machine. But now a growing number of immigrants' rights advocates and outspoken members of the immigrant community are facing detention, deportation, or criminal charges.

Coincidence? No chance. When immigration activists face harsher penalties in increasing numbers, it sends a clear signal to the rest of an already targeted immigrant community: keep quiet, or you'll be next.

The Trump administration is deliberately creating a climate of fear and uncertainty, fomenting panic among immigrant communities. Over the past year, many immigrants have decided to steer clear of courthouses, hospitals, and other public spaces, for fear of arrest and deportation. Imagine being too afraid to seek lifesaving medical treatment or to seek justice against an abusive partner because of the threat of ICE agents lurking around the corner.

Trump's racist targeting of immigrants isn't the only pattern at work here. From arresting and brutalizing Inauguration Day protestors, to labeling U.S. senators with racial epithets to screaming "fake news" at every New York Times story, the Trump administration attacks people who don't agree with its policies.

Enough is enough. We have the backs of immigration activists like Ravi Ragbir in New York, and we're not afraid of a fight. Stand with us and stand up to ICE's bullying, predatory hunt for activists.