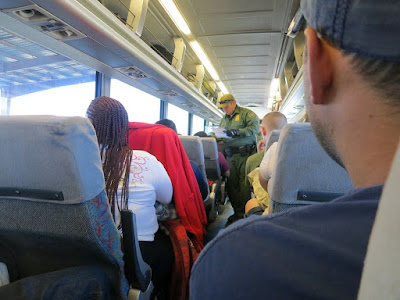 Greyhound is aiding in the criminalization of immigrants and the racial profiling of Black and Latinx people. In a move that evokes memories of Arizona’s “show-me-your-papers” law, U.S. Customs and Border Patrol agents are boarding buses and questioning passengers about their immigration and citizenship status. If a person is unable to provide documentation on the spot, they are removed from the bus and detained. By allowing CBP to conduct warrantless searches on their buses, Greyhound is aiding in Trump’s deportation machine that’s tearing apart families and wrecking communities.

Border Patrol agents have the legal authority to do immigration checks within 100 miles of a U.S. border as long as they have probable cause and/or a warrant.1 In the case of the Greyhound searches, CBP agents are boarding buses indiscriminately and racially profiling passengers to target them about their immigration status. American Civil Liberties Union chapters in 10 states have written a letter to Greyhound asking them to adopt policies banning these citizenship checks as they violate passengers constitutional rights against illegal search and violate Greyhounds own policies of not allowing non-ticket holding passengers to board buses.2 More than 3 million Americans don’t have a government-issued ID,3 leaving them at risk of possible arrest and detention when they ride a Greyhound bus. According to the ACLU, Greyhound is within their legal right to refuse warrantless searches by federal agents unless the bus is at a border crossing.

We know from videos and witness accounts that CBP agents are specifically targeting racial minorities for these searches, fitting in with Trump’s rhetoric that demonizes Black and Latinx people. From only checking IDs of “people who had accents or were not white”4, to stopping someone because their “shoes looked suspicious”5, to arresting a Jamaican woman who entered the country legally to visit her granddaughter,6 Greyhound is giving CBP free range to put people of color in the prison-to-deportation pipeline and separate children from their parents. 82% of the people stopped by CBP in Michigan at bus stops were Latinx7 and between 2006 to 2010, CBP erroneously arrested 300 legal immigrants in western New York state.8

This is 2018, not 1818. We don’t have to carry “passes” or “freedom papers”9 in order to travel from one location to the next. Over 50 years ago, Freedom Riders rode Greyhound buses into the Deep South to fight for Black civil rights, now Greyhound stands on the wrong side of history. Cities like Spokane, Washington are now accusing Greyhound of violating their anti-discrimination laws by allowing these illegal searches.10 With anti-immigration policies becoming more extreme each day, it’s only a matter of time before other municipalities start fighting back. Greyhound still has time to do what’s right. Join Color Of Change in telling Greyhound to ban Border Patrol agents from boarding their buses and performing illegal searches.