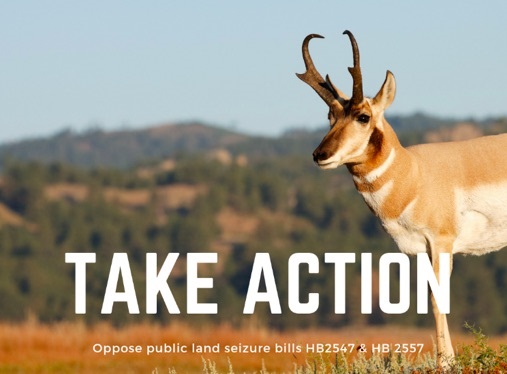 Recently we have seen some monumental progress at the federal level with Senate Bill 47 (Natural Resources Management Act) passed and is on its way to the President for signature. The passing of this bill permanently re-authorizes the LWCF, re-authorization of the U.S. Fish and Wildlife Service's Partners for Fish and Wildlife program, and re-authorization of Neotropical Migratory Bird Conservation Act are among several measures that are contained within the bill.

Disappointingly, right now there are two public lands seizure bills, HB 2547 and HB 2557, in the Arizona legislature. This is not the first time our public lands birthright has been shamelessly attacked by ill-intentioned politicians craving personal gain, and it won't be the last. It's no surprise that the lead sponsor on both bills is a real estate developer aimed at selling off and developing our cherished public lands. Click the button below and urge your legislators to vote no on HB 2547 and HB 2557! And, please share this action alert with your friends that are Arizona residents and public land advocates.

HB 2547 is an unconstitutional attempt by some legislators to take over our American public lands through the creation of a new public lands management agency, whose charge would be to collect revenues from public lands that currently go to the federal government. Under such a scheme, our public lands would be managed for profit rather than multiple uses.


HB 2557 attempts to appropriate $1,000,000 in taxpayer dollars for an unpopular and unjustifiable study of revenue losses on public lands.

TAKE ACTION NOW
Posted by Jana Segal at 7:53 AM