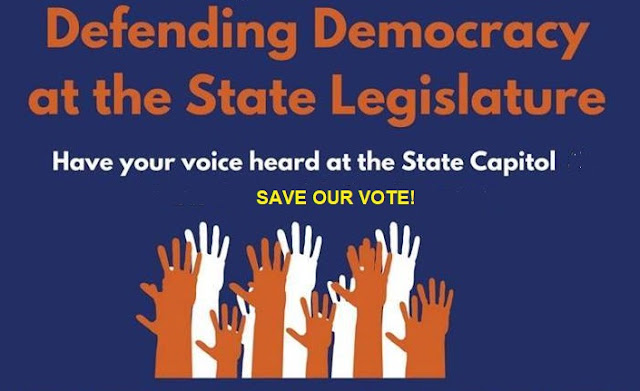 Republicans in the state legislature have introduced a flurry of bills to make it more difficult to qualify ballot initiatives and register voters. Their strategy is simple: they’ve seen the power of the grassroots so they want to limit that power however they can.

We’ve succeeded in knocking back several bills that would undermine the democratic process in Arizona. But the battle rages on! Last week, Republicans quietly and quickly jammed a bill through the Senate that would purge early voters if they missed two elections. At the same time, the legislature is still trying to move bills to make ballot initiatives and voter registration more difficult. But we can still stop these bills. Here’s what we’re fighting this week:

HB 2616: Makes it a crime to register voters as part of your job.

To find out who your Representatives are, first find your district:
https://azredistricting.org/districtlocator/

Then use that district to find your state Reps:
https://www.azleg.gov/MemberRoster/

Hello, my name is________________ and I am a constituent of Representative __________ from <YOUR TOWN>. I’m calling to express my concern about several bills that would undermine democracy in our state. SB 1451 would place onerous burdens on signature gatherers, SB 1090 will make emergency voting more difficult, HB 2616 would criminalize voter registration, and SB 1188 will disenfranchise a quarter million early voters. We should be facilitating access to voting, voter registration, and ballot initiatives, not making it more difficult. Can I count on Representative ___________ to vote NO SB 1451, SB 1090, HB 2616, and SB 1188 in the House?

Look up your state Senator:
https://www.azleg.gov/MemberRoster/?body=S

For Republican Senators (except Heather Carter)

Hello, my name is ______________ and I am a constituent of Senator __________ from <YOUR TOWN>. I want to express my severe disappointment that Senator ____________voted in favor of SB 1188 last week. SB 1188 will disenfranchise hundreds of thousands of voters and we should be making it as easy as possible for people to participate in our democratic process. I will remember this vote in the next election.
Posted by Jana Segal at 2:07 PM