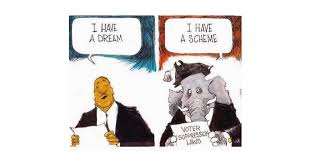 In this time when we are doing everything we can to fight for our water and health, we have state legislators who aren't even allowing environmental bills to be heard on the floor of the Senate.  I would really prefer to be non-partisan on this page. But the fact is that the state GOP is fighting to weaken water regulations and even our ability to vote. That is despite having a majority of only one Republican senator. We can't let them silence our voices. We need make our voices heard loud and clear with phone calls AND become part of the public record on Request to Speak. Then we need to vote them out of the majority next election.

But they aren't making this easy for us. They have already proposed laws that make it harder to enact citizens initiatives! And currently they are pushing through bills to lessen voter participation.

If you haven't signed up for Request to Speak, please, do that now. (It takes a day or two for someone to go to the capital and sign you up.)

On Tuesday and Thursday this week there are some bad bills in committee. You can weigh in on Request to Speak anytime now or while it is being heard in those meetings.

This week at the Capitol there are some dangerous threats to voters and Clean Elections and we need your help to stop them.
TUESDAY AFTERNOON – HOUSE ELECTIONS COMMITTEE
SB 1188: Would take the ‘Permanent’ out of the Permanent Early Voting List in Arizona. This bill is sponsored by Michelle Ugenti-Rita and would take Arizona voters off of the Permanent Early Voter List (PEVL) and stop automatically mailing them their early ballots IF they do not vote in two consecutive election cycles.

Receiving a ballot in the mail makes voting more convenient and accessible. This is why about 80 percent of Arizona voters (2.9 million) receive ballots in the mail. We estimate that SB 1188 would remove at least 250,000 voters from PEVL using most recent elections data.
We’d like to invite you for a press conference at 1:15 pm on the Capitol Lawn – after which we will pack the Elections Hearing Room in the House to show legislators we will not stand for this egregious attack on voters.
THURSDAY MORNING – SENATE JUDICIARY COMMITTEE
HB 2616: Would require groups and individuals who register voters (either as a part of their job or volunteers) to return completed forms within 10 business days of completion. The penalty for violation would be a civil fine of $25 per form per day (with no max.), or a class 2 misdemeanor (4-month max. sentence) even for an accidental violation.
Across the state, Arizona saw record-breaking voter registration in 2018, especially among young people and people of color. Rather than finding ways to encourage and sustain that level of participation, HB 2616 could discourage grassroots, organic civic engagement by everyday people and voter registration activities.
HB 2724: Is yet another attack on Arizona’s Clean Elections Program being shepherded by the Arizona Free Enterprise Club. The bill would create new avenues for dark money groups and other bad actors to evade enforcement by the Clean Elections Commission.
Use the Request to Speak System, call or email your legislator or show up for a committee hearing and have your voice heard!
- Arizona Advocacy Network and Foundation
http://www.azadvocacy.org/