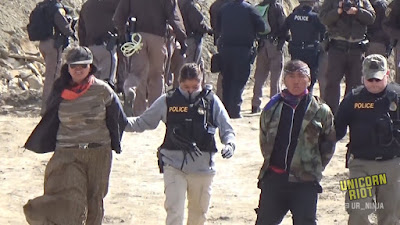 Last week, raids and arrests continued as Water Protectors stood their ground against Trump's push to complete the Dakota Access Pipeline. And just now, the Army Corps announced that it will allow the company to continue construction on the pipeline.1


We need you to weigh in to stop this pipeline, which would cross the Missouri River and endanger drinking water for the indigenous Standing Rock Sioux and all others downstream.

We will be hand-delivering comments to the Army Corps in D.C. on Thursday, in protest of this decision.

Tell the Army Corps — Fulfill the commitment to conduct a full Environmental Impact Statement on the Dakota Access Pipeline!

The 1,170 mile pipeline is projected to carry 500,000 barrels of oil underneath the Missouri River per day. Last December, President Obama announced that the U.S. Army Corps of Engineers would not grant Dakota Access the permit needed to drill under the Missouri River at Lake Oahe and complete construction of the pipeline.

The Army Corps has said they will conduct an Environmental Impact Statement (EIS) on the river crossing and explore possibilities for alternative routes, but Trump has since ordered the Corps to expedite approval of the pipeline.2

Jana, your comment is needed to demand that the Army Corps completes the necessary environmental review on the Dakota Access Pipeline.

The Army Corps must carry out a full and robust environmental review — not only at the Lake Oahe location, but for the full length of the proposed pipeline route. The Corps must consult with the Standing Rock Sioux tribe and evaluate how this pipeline would affect its drinking water, health, culture and way of life.

The Dakota Access Pipeline has already been routed away from Bismarck to protect the water supply of its majority white, affluent community. And the Army Corps has routinely ignored recommendations from the Environmental Protection Agency and moved forward with the project in spite of inadequate tribal consultation.

The Army Corps has an obligation as a federal agency to conduct a full environmental review — and we'll make sure they get the message loud and clear when we join the delivery this Thursday in D.C.

Please take a moment to submit a comment through our sister organization, Food & Water Action Fund, and tell the Army Corps to comply with President Obama's order for a full environmental review.


Thank you for weighing in,