Let Rep. McSally know how you feel about repealing the Affordable Care Act 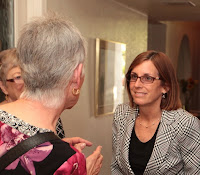 TOMORROW, Rep. Martha McSally will be available to hear constituents' opinions on the repeal of the Affordable Care Act (ACA). This is the first opportunity since Republican Congressional leaders and President Trump took office. Republican plans to repeal the Affordable Care Act are already crumbling under grassroots pressure--and this could be the opportunity we need to stop them for good. We know that turning out in the streets and calling our representatives is making a difference--and it's really getting under President Trump's skin.

Now we have our best chance yet to show Rep. Martha McSally how big our pro-woman and pro-healthcare movement really is. We need Rep. Martha McSally to hear directly from all of us that we won't allow Congress to repeal the ACA and take away health insurance from nearly 30 million, birth control from 55 million, and coverage of preventive care from millions more.1

Here are the details of the event:

WHAT: Your member of Congress is holding a town hall meeting to hear constituents' opinions about repeal of the Affordable Care Act.

When you go, please be sure to take the opportunity to speak. Use your own words, but here are some points to guide you:

The Affordable Care Act matters to me because [share a personal story or reasons why.]

Rep. Martha McSally, what would you say to the young adults who are able to stay on their parent's health insurance up to age 26 thanks to the Affordable Care Act? Or to the many residents of Arizona who have a pre-existing condition which could make them un-insurable without the ACA?

27 million women have benefited from having all FDA-approved contraceptive methods without a co-pay, including emergency contraception. Nearly three in five women have stated they have struggled to afford birth control at some point, including 57% of young Latinas and 61% of young Black women.3

Rep. Martha McSally needs to hear from you.

Questions may be sent to Dan Shearer at the GV News and selected questions will be posed to McSally. E-mail : dshearer@gvnews.com

P.S. Check out our new Tumblr for more personal stories of individuals positively impacted by the Affordable Care Act.

*NOTE: CHANGE OF VENUE.  MAY BE SOLD OUT.