Resist climate-denier Scott Pruitt as head of the EPA 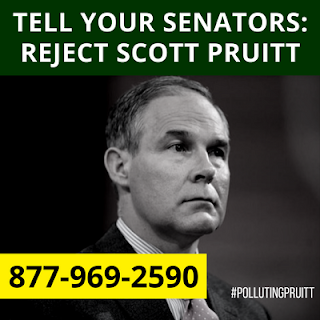 Will climate-denier Scott Pruitt be next? Call your senator TODAY at 877-969-2590 and tell them to vote against Pruitt’s nomination as the head of the Environmental Protection Agency.

If you’ve never called your senator before, don’t worry. It’s easy! There’s a script and a toll-free number ready for you. It will only take a couple of minutes, but it will make a big difference.

If you’ve never called your senator before, don’t worry. It’s easy! There’s a script and a toll-free number ready for you. It will only take a couple of minutes, but it will make a big difference.

Step 2: Before you are connected with your senate office, you will hear a message from me with some brief talking points.

Step 3: After the message ends, you will be transferred to one of your senators' offices. You may be put on hold, but don’t hang up! Your message couldn’t be more important.

In case you want to practice ahead of time, here are the talking points written out:
My name is _______ and I’m calling to ask the senator to vote NO on Scott Pruitt’s nomination to head up the EPA.


Scott Pruitt is a known climate-change denier who pushes fracking and other dirty energy sources over clean energy. By nominating Scott Pruitt as head of the Environmental Protection Agency, Donald Trump is putting America’s communities, health, and environment at risk.

As Oklahoma Attorney General, Pruitt blocked basic protections for clean drinking water and helped the industry hide the connections between fracking and earthquakes. Pruitt has made a career suing the EPA to undo critical environmental protections for our air and water. He’s also received hundreds of thousands of dollars in campaign contributions from the fossil fuel industry since 2002, leaving little doubt about whose interests he’ll protect as EPA head — and it’s not people or the environment.

Thousands have already spoken out in resistance — writing messages, showing up at rallies, and going to town halls. Now let’s pick up the phones and make sure we can’t be ignored! Call 877-969-2590 right now.