Tell Your Member of Congress to Take the Dreamer Pledge 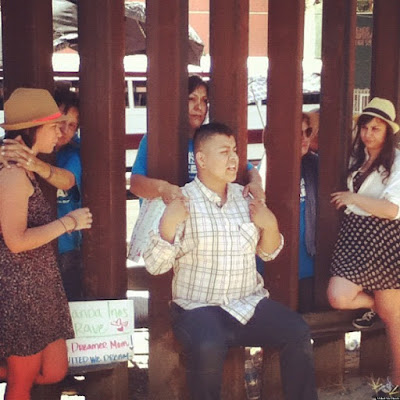 On Sept. 5, Trump announced that he was terminating the Deferred Action for Childhood Arrivals (DACA) program. This Obama-era program provides relief from deportation for an estimated 800,000 young immigrants. Because Trump terminated DACA, over 10,000 Dreamers are estimated to have already lost their protections, and nearly 1,000 more will lose DACA each week and become vulnerable to Trump’s deportation force.

Ask your members of Congress to become Dream Heroes now! (Follow this link for the contact information of your representatives.)

Who are Dream Heroes? They are members of Congress who pledge to protect Dreamers. Congress needs to pass a government funding bill this week - and the DREAM Act must be part of that bill. There is bipartisan support for the Dream Act in both the Senate and House, and this is our last chance this year to protect DREAMers from Trump's deportation machine. The pledge is that they will only commit to vote on a “continuing resolution” that has the Dream Act attached. Call your MoC and tell them: A vote on a continuing resolution without the Dream Act, is a vote to deport Dreamers.

Caller: Hello! My name is [name] and I’m calling from [place in state]. Could you please tell me whether the [Senator/Congressman] supports protecting Dreamers as part of the Continuing Resolution?
If MoC supports DREAM in the CR
Staffer: Yes! The [Senator/Congressman] is totally opposed to the decision to end DACA and won’t vote for a Continuing Resolution unless it includes the DREAM Act.
Caller: I’m glad to hear that. Will the [Senator/Congressman] pledge to be a “Dreamer Hero” and protect Dreamers from deportation? The Dreamer Pledge is a public commitment to do everything he/she can to pass the DREAM Act as soon as possible, including withholding [her/his] support for the Continuing Resolution unless it includes the DREAM Act.
Staffer: I’m not sure.
Caller: Please ask the [Senator/Congressman] to make a public commitment so Dreamers know he/she is standing with them. 27 members of the House and 6 members of the Senate have already taken the Dreamer Pledge, and an additional 34 Republican Members of Congress signed a letter saying that “we must pass legislation that protects DACA recipients from deportation” by the end of this year.

If MoC doesn’t support DREAM in the CR

Staffer: The [Senator/Congressman] doesn’t think that a legislative fix for DACA is an emergency; the president gave us until March to address this program, and we have more urgent concerns right now.
Caller: There are at least six senators and dozens of representatives— including Republicans—who disagree with you. Because Trump terminated DACA, over 10,000 Dreamers are estimated to have already lost their protections, and nearly 1,000 more will lose DACA each week and become vulnerable to Trump’s deportation force. For those young people and their families, this is an emergency and we must take this opportunity to protect them by including the DREAM Act in the Continuing Resolution.
Staffer: I’ll pass your thoughts along to the [Congressman / Senator].
Caller: Yes please do, and please take down my contact information so you can let me know what the [Congressman / Senator] decides to do.