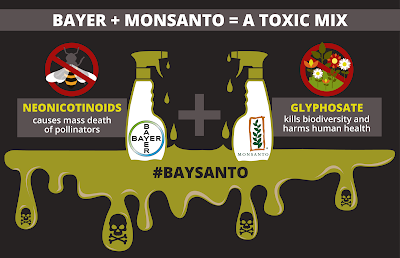 Farmers are scared of it. Bees could be decimated by it. And anyone who eats — that's all of us — should be mobilizing to stop it.

I'm talking about a merger between Bayer and Monsanto, two of the biggest global agribusiness giants, that would create the world's largest seed and chemical corporation... and possible disaster for pollinators, farmers, people, and our planet.

Tell the Department of Justice to reject this toxic mega-merger now. 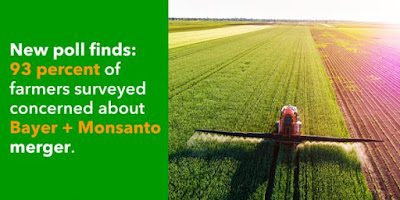 What makes this Bayer-Monsanto merger so dangerous?

One out of every three bites of food we take depends on bees and other pollinators. Yet bee populations are in a free fall that's only getting worse — beekeepers reported losing over 40% of their honeybee colonies last year, up from an already alarming 33% the year before.

Yet Bayer and Monsanto keep flooding the environment with neonic pesticides that are deadly to bees.

A Bayer-Monsanto merger would cement in place the chemical-intensive farming practices that threaten pollinators and imperil our global food supply, while likely increasing costs and limiting planting options for farmers.

The Department of Justice has proposed a settlement that would allow these two chemical titans to merge. While the department still has the power to stop the merger, it's unlikely to change course without massive public pressure from people like you and me.

The DOJ is inviting comments from the public on its proposed settlement plan for the merger — but only until August 13.

NRDC and activists like you have been dedicated to saving the bees for years.

We've petitioned and sued the EPA to crack down on the use of neonics, and almost 100,000 of you have written to Amazon CEO Jeff Bezos calling on him to stop selling bee-toxic pesticides.

And we've seen progress: With help from NRDC members and activists, we went to court and compelled the Trump administration to provide federal endangered species protection to the rusty patched bumble bee.

And major retailers like Home Depot, Lowe's, Walmart, and True Value have already announced they are taking steps to phase out neonic products or neonic-treated plants (or both).

But right now, the stakes couldn't be higher — and the need for action couldn't be more urgent.

We must ensure that this toxic merger never moves forward — for the sake of pollinators, people, and the health of our planet.

Tell the Department of Justice that you oppose the Bayer-Monsanto merger and will fight it at all costs.