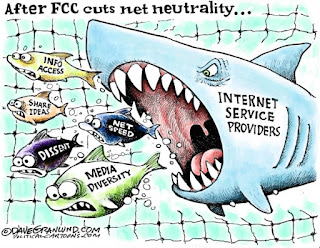 California has the most comprehensive state-level net neutrality bills in the country.(1) Senate Bill 822 (Wiener) and Senate Bill 460 (de Leon) would restore all of the net neutrality protections that were stripped by the FCC last year.
But Big Telecom isn’t going down without a fight. They’re doing everything in their power to block passage of SB 822 and SB 460, or at least water down the bills.
States are quickly moving to restore net neutrality protections and aren’t being stopped by the FCC, which doesn’t have authority over state law.(2)  California is home to some of the world’s largest internet companies and can set an example for the nation -- including your home state. Will you join us and our partners in demanding that California legislators uphold a fair and open internet for all?
Tell California legislators to pass the net neutrality bills SB 822 and SB 460.
With the net neutrality repeal in effect, Internet Service Providers (ISPs) like Comcast, Verizon, and AT&T are allowed to charge us to access websites and services. But SB 822 and SB 460 would restore in California the net neutrality protections gutted by the FCC’s disastrous decision. If passed, ISPs would be prohibited from blocking content, slowing certain sites or services, or charging new fees for users and companies to reach audiences online.
FCC Chairman Ajit Pai has claimed that with the new federal net neutrality policy, states cannot circumvent federal law and make their own. However, there isn’t even consensus among legal experts as to if that statement is true with the FCC’s limited power.(3) Washington state just passed their own net neutrality bill, and many other states are moving to do the same. We need to keep up the momentum.
Eighty-three percent of Americans want a free and open Internet.(4) SB 822 and SB 460 would fill this gap for Californians after the FCC stripped consumers of their rights. But Big Telecom lobbyists are using all their resources in states across the country to block legislation that would restore protections for us. Will you help us fight back and win net neutrality in California -- setting an example for even more states to follow?
Sign the letter of support to demand California legislators pass the net neutrality bills.
Yours in the fight,
Brenna, along with Annie, Caitlin, Eddie, Emma, Lindsay, Mai, Mary, Molly, Raquel, Rebecca, Scottie, and Tim (the Courage team)