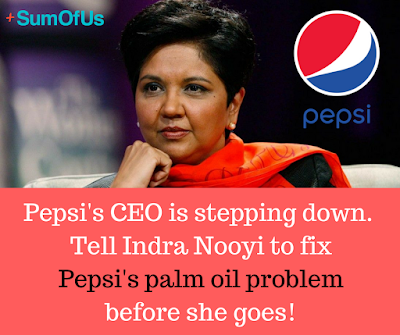 Pepsi’s CEO is stepping down, leaving a legacy filled with rainforest destruction, dying orangutans, and exploited workers for cheap palm oil. But Indra Nooyi wants to be remembered for the good work she’s done. A huge public campaign could push her to fix Pepsi’s palm oil policy before she leaves.

Tell Indra Nooyi to make her final act count for the planet and close the loopholes in Pepsi’s palm oil policy.

Pepsi’s palm-oil record is ugly. Now its CEO of 12 years, Indra Nooyi, is stepping down -- and it’s our chance to push her to do the right thing and clear her legacy of the illegal rainforest destruction and worker abuse happening on palm oil plantations.

The CEO wants to be remembered for the good work she’s done and with your help, we can point her in the right direction. It’s actually pretty simple, all that she needs to do is deliver on Pepsi’s outstanding palm oil promises before she steps down on October 3rd. 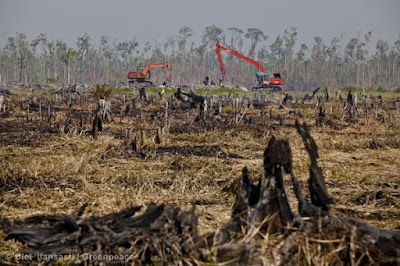 Pepsi’s business partner IndoFood is one of the industry’s worst offenders.Multiple investigations have exposed a culture of disregard for environmental laws, and a feudal attitude towards its workers.

Under Nooyi’s leadership, Pepsi has tried to fool us with warm words about its palm oil commitments and the loopholes allowing Indofood to act like a bully.

The cold fact is, CEO Indra Nooyi has been trying to pass the buck on the issue for years. Pepsi profits from palm oil destruction through its Joint Venture Partnership with IndoFood.

But Indra Nooyi knows her last few weeks as CEO are crucial. She won’t want her name to be mired in a huge public campaign and media storm about palm oil scandals, while her critics and business leaders are writing up articles about her legacy.

Please sign the petition to urge Indra Nooyi, in her last few weeks as CEO, to take action for the planet and the people. 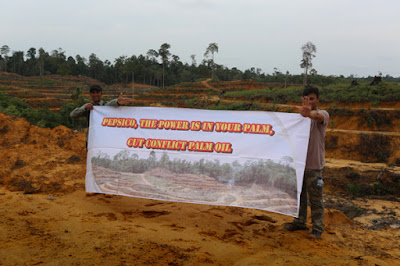 Palm oil destruction is wreaking havoc in Southeast Asia. The Indonesian island of Borneo loses an area of forest the size of a football pitch EVERY 47 seconds. And as forests are cleared for palm oil, endangered species like orangutans and pygmy elephants lose their habitat and die.

In the last 16 years, half of Borneo’s orangutan population was wiped out.

SumOfUs members have shamed palm-oil guzzling brands into action before. Last year, over 200,000 of us signed a petition telling Nestle to drop their Guatemalan palm oil supplier REPSA, after it was found guilty of ecocide, causing massive fish and wildlife die-offs -- and we won!

Write a letter to Pepsico today!