Tell your Senator: Nobody is above the law. Vote against Trump's Supreme Court Nomination 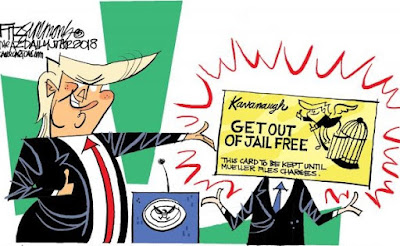 At this point you know the drill: another day, another breaking scandal about a corrupt member of President Trump’s inner circle. Yet Republicans want to let Trump make another lifetime appointment to the Supreme Court while he’s under active criminal investigation. Donald Trump cannot appoint a Supreme Court justice who could vote to protect him from the investigations into his potential collusion with Russia and other crimes.

This appointment is a loser for democratic legitimacy. Democrats must stand together to oppose it, and at least one Republican must join them.

Contact Senators Senators John McCain and Jeff Flake now. Urge them to stop the nomination of Brett Kavanaugh to the Supreme Court.

Donald Trump cannot appoint a Supreme Court justice who could vote to protect him from the investigations into his potential collusion with Russia and other crimes. As your constituent, I demand you vote against Brett Kavanaugh's nomination.

----
Trump hasn’t even been president for two years yet, and these are some of the people he’s hired in the past couple years:
Again: that’s just a partial list, and that’s just from the past couple years. Yet Trump is someone we should trust to fill a lifetime appointment on the Supreme Court? After his lawyer said Trump would fight a subpoena from the Mueller investigation all the way to that very same Supreme Court?

Not on our watch.

Trump isn’t fit to make this lifetime appointment. Call Senators Senators John McCain and Jeff Flake now and urge them to take a stand against Kavanaugh’s illegitimate nomination before it’s too late.

We still have time left to turn the tide in the Senate against Brett Kavanaugh’s illegitimate nomination -- but not much. Hearings start after Labor Day.