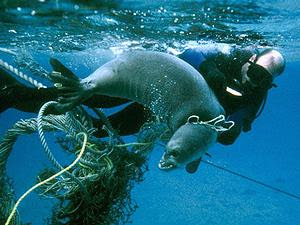 Your representative needs to hear from you before they vote! Right now, anti-environment interests in Congress are attempting to gut the Endangered Species Act, despite bipartisan and overwhelming public support for this critical line of defense for at-risk marine life.

Tell your representative in Congress: Protect the Endangered Species Act from anti-environment attacks before the world’s most at-risk ocean animals disappear once and for all >>

Now, it’s the seal-saving ESA itself that is endangered in Congress.

Any day now, Congress will vote on a series of anti-environment bills designed to undermine and chip away at the ESA. These grave attacks could be disastrous for Hawaiian monk seals and other endangered species dependent on ESA protections. That’s why these ocean animals desperately need you to speak up today.

The ESA is one of the nation’s most successful and popular laws. 99 percent of all species listed as endangered or threatened under the ESA have avoided extinction.

By saving ocean animals from extinction, the ESA also supports healthy ecosystems and natural places, and provides significant economic benefits within the United States from wildlife tourism. Sea turtle ecotourism in Juno Beach, Florida alone has an annual economic impact of around $60 million.

Why would Congress now undermine this success story and abandon endangered species?

Special interests in Congress want to further their anti-environment agendas, and they’ll win if we don’t take a strong stand for oceans and endangered species today. Please, speak up on behalf of Hawaiian monk seals, and our oceans and communities, before it’s too late.

Save endangered species and the law that protects them: Tell your member of Congress to oppose any legislation that would weaken the Endangered Species Act >>

The ESA is a success story – one that we cannot afford to let Congress rewrite.