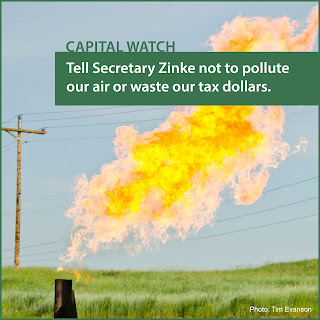 Click here to submit the your personalized version of the following message:

(They have been throwing out identical form letters....)

I strongly oppose the Bureau of Land Management's proposal to effectively eliminate safeguards that reduce methane waste from drilling operations on public lands.

For too long, oil and gas companies have vented and flared natural gas unchecked, polluting our air and wasting taxpayer-owned resources. Recently, taxpayers have lost as much as $23 million each year in royalty revenue due to methane waste.

Leaving in place the existing safeguards will ensure that companies detect and fix natural gas leaks—resulting in a fairer return for taxpayer-owned resources. Leading companies have confirmed they can use available, low-cost technologies to do the job, giving them more natural gas to sell.

Once again, I oppose effectively eliminating the BLM’s methane waste safeguards. I urge you to look out for American taxpayers by enforcing existing safeguards that reduce natural gas waste from drilling on lands owned by all of us.

- Center for Western Priorities
Posted by Jana Segal at 10:26 AM