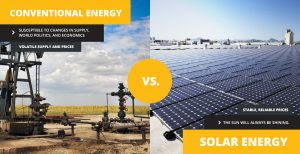 A group of us in Tucson have been fighting an uphill battle against TEP installing 10 dirty gas-fired generators at the Sundt Plant when they should be transitioning to clean energy.  One of the road blocks we encountered was the delay in enforcing the Clean Power Plan that put limits on how much carbon dioxide plants could spew into our atmosphere. The head of Trump's EPA, Scott Pruitt, is working to repeal the regulation altogether. Now the Arizona Public Service (APS) wants to slow down the transition to clean energy even further for the profit of the fossil fuel industry. (While the fossil fuel industry is biting at the bit to extract from our cherished national parks, nature preserves and pristine shorelines!)

Do not let them have more power to delay the transition to solar for the profit of big oil.

Ask your Representatives to Vote NO on HCR2017!

HCR2017 is a cynical attempt to confuse voters and stop clean energy from advancing and was added as a last-minute strike-everything amendment with limited public review and comment. HCR2017 would refer to the ballot a measure with a name that is nearly identical to the citizen initiative. It is called the “Clean and Affordable Energy for a Healthy Arizona Amendment” versus the citizen initiative “Clean Energy for a Healthy Arizona Amendment.” It also includes some similar language, but unfortunately includes language that would allow the Arizona Corporation Commission (ACC) to do nothing relative to advancing clean energy.

This unconscionable measure is again being pushed by the largest monopoly utility in the state, Arizona Public Service (APS). It is an entity that can only be held accountable by the ACC, the courts, and the people, and now the legislature is proposing to undercut our ability to do that.

Clean energy is affordable, reliable, and resilient. Unfortunately, these utilities do not view it that way and they fail to consider the clean air, clean water, and climate benefits provided by solar and wind.

HCR2017 is a recipe to do nothing and that is the last thing that we need. Renewable energy is a key part of our states future. It can help to sustain our economy and protect our air and water, but the legislature and the utilities need to get out of the way for that to happen.

Please send a message to your representatives today.
Posted by Jana Segal at 9:02 AM