Discussion on Excavation of the Santa Cruz

Excavation of the Santa Cruz

When the county flood control district dredged the Rillito out by Swan and Craycroft, there was quite a public outcry over what was perceived to be over-excavation, at the expense of vegetation, habitat and scenery. The justification for the work was a flood threat to property that lies on the outskirts of the Rillito in that area. The public notice for that work was less than robust.

There is now coming a public discussion related to similar dredging work planned for segments of the Santa Cruz. The reason it’s deemed necessary by the flood control folks is again the flooding potential. What’s planned is a 3 phase project. Only phase 1 is moving forward. Regina has requested a recommendation by the County Board of Supervisors before any work beyond the first phase begins. I agree. More information is better before we move ahead with work that will be so public, and is guaranteed to generate significant public comment. 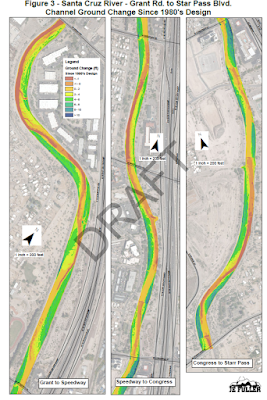 There hasn’t been any flooding maintenance on the Santa Cruz in the downtown region for over 35 years. Over that time, sediment has built up, and property along the edges of the banks has been developed. Each of those developments increases the potential loss if a large rain event occurs. The flood control folks estimate the value to be north of $80M.

Bridges that were been built at Speedway, Grant, Congress and St. Mary’s were built to withstand flood effects less than what is now projected due to the sediment build up. The safety implications are something we all need to take seriously.

The first phase of the work will take place from Speedway to Grant. The segment is owned by the Regional Flood Control District (RFCD). Their plan is to preserve some of the vegetation where possible, but they’ll excavate enough sediment to protect outlying businesses. Most susceptible is the Forbes Business Park near Grant Road. The RFCD will take some of the excavated sediment and create a park on the west side of the banks, just north of Grant. They’ll repopulate that new park with plants from either the work being done in this project, or from their plant nursery. It’ll be a new amenity to the area. The work will start this month in order to get it done before the summer monsoon’s begin.

Phases 2 and 3 will take the project from 29th to Mission Lane, and from Mission Lane to Speedway. The work being proposed for these segments will be discussed by the Board of Supervisors before coming to us. Anticipate those conversations to begin soon.

This work is being considered based on some flood data put together by JE Fuller. Their work has not been validated yet by FEMA. That agency will translate it into newly regulated flood boundaries. These maps (above) show what we’re working with at this point.