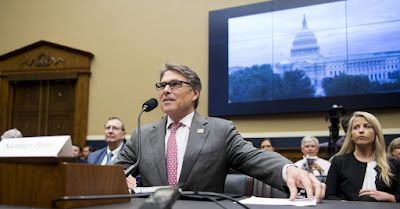 Secretary Perry is saying we have to prop up uneconomical coal and nuclear plants because of "national security" - even though there is no evidence of any threat to the grid if those plants do go off-line.

Federal Power Act section 202(c) states that, during the continuance of a war in which the United States is engaged or when an emergency exists by reason of a sudden increase in the demand for electric energy, or a shortage of electric energy, or of facilities for the generation or transmission of electric energy, or of the fuel or water for generating facilities, or other causes, the Secretary of Energy may require by order temporary connections of facilities, and generation, delivery, interchange, or transmission of electricity as the Secretary determines will best meet the emergency and serve the public interest. 16 U.S.C. § 824a(c).

Prior to the Trump Administration, this rule had been enacted six times in 17 years to respond to grid failures or natural disasters that damaged electrical infrastructure. In 2017 alone, Secretary Rick Perry has used this section twice to direct the ongoing operation of outdated, polluting coal power plants after the date they were to be shut down due to noncompliance with environmental regulations or the desire of the owners of the plants to stop paying the higher cost of maintaining the plants. Now Sec Perry is testifying to Congress that he needs to use his section 202 (c) authority to direct the continued operation of outdated coal, gas, and nuclear plants scheduled for retirement in the name of "national security." This is an end run around environmental law and a forced subsidy for expensive and dangerous power plants, just to satisfy the desires for more profit by the fossil fuel and extractive industries. This gross overreach must be stopped!

Might be a good action to make public comments about the proposed section 202(c) actions at this public comment link. They aren't legally binding, but should show how the citizens feel about this: