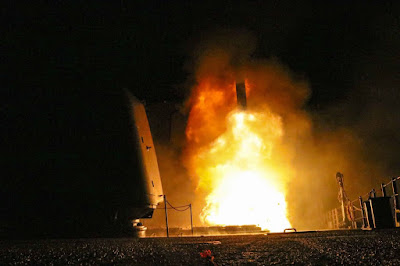 Trump is pushing America toward war – and his illegal missile strikes1 on Syria could be just the beginning.
He’s now assembling a cabinet of warmongers: Iraq War architect John Bolton as National Security Advisor, war-loving Mike Pompeo as Secretary of State, and torturer “Bloody Gina”2Haspel as CIA Director. With them in charge, things could turn very bad, very quickly.
Sign the petition to the Senate: Stop Trump from marching us into needless war. Reject the Trump War Cabinet!
These appointees are out for blood. It only took John Bolton 5 days as National Security Advisor before the U.S. launched missiles at Syria – in an apparent violation of the War Powers Resolution.
Unlike National Security Advisor, the other members of Trump’s War Cabinet need Senate approval to take office. If we can pressure the Senate to block Mike Pompeo and Gina Haspel, we can severely weaken Bolton’s war-hungry position and halt Trump’s march to war.
Sign now to tell the Senate: “Block Trump’s War Cabinet!”
Trump’s pick for Secretary of State, Mike Pompeo, is on record saying that he thinks all Muslims are “potentially complicit” in terrorism. He supports torture, doesn’t believe climate change is real, and is on board with pre-emptive strikes in Iran and North Korea as well. Senate Dems like Tim Kaine have already come out against Pompeo, because if he’s is confirmed as the nation’s chief diplomat, then diplomacy flies out the window.
You can’t let Trump assemble a War Cabinet. Tell the Senate to block Trump’s nominees.
Gina Haspel not only supervised torture, she later drafted orders to destroy evidence of torture to cover up the CIA’s involvement. The European Center for Constitutional and Human Rights has called for her arrest as a war criminal, but instead Trump wants her to be the next CIA Director.
Thousands of activists just like you can already see the blood in the water. If Trump gets his way with these nominees, endless war is all but guaranteed.
The Senate needs to hear from you right now. Tell them to block Trump’s War Cabinet.
- Reuben and the team at Demand Progress
Posted by Jana Segal at 10:29 AM