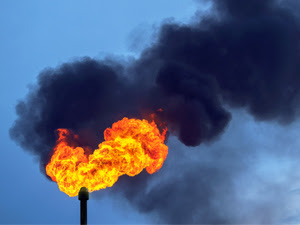 Last month we won a major victory for the climate, clean air and taxpayers. A federal court rejected the Trump Administration’s attempt to suspend a commonsense rule requiring oil and gas operators who drill on public lands to capture their methane waste and air toxics instead of pumping them into surrounding communities.

But on the same day the court issued the ruling, Interior Secretary Ryan Zinke launched his third attack on this safeguard, this time proposing to scrap the rule’s protections for good.

Earthjustice is still fighting to protect the rule, and we need your help again. Last month’s court decision was in part because the Bureau of Land Management did not provide for a meaningful opportunity for you—the public—to comment on suspending the rule.

This rollback takes direct aim at the health and safety of tens of thousands of Americans living near oil and gas operations. In their communities, natural gas is leaked and vented into the air, causing smog and asthma attacks and releasing toxic air pollutants like formaldehyde and benzene. Gas flares rumble like jet engines and make the nighttime look like bright summer days.

Repealing this commonsense protection is another shameless giveaway of taxpayer resources and an assault on the air and health of communities just to appease the Trump administration’s corporate fossil fuel donors.

The BLM’s current Methane Waste Prevention Rule puts millions of dollars into the public coffers. When oil and gas companies leak, vent or flare publicly-owned gas on public lands, the rule requires companies to pay back the public for their wasteful practices. Without the rule in place, BLM’s own analysis shows that oil and gas companies will waste 180,000 tons of methane each year—deliberately venting, leaking, or flaring $824 million worth of publicly-owned natural gas into the air over the next decade.

Methane waste is a simple problem to solve. The Waste Prevention Rule requires drillers to use proven, low-cost solutions to capture publicly-owned natural gas that otherwise would be flared, vented, or leaked into the air.

Americans have fought for years to protect these vital clean air protections and we won’t back down now. Tell Secretary Zinke to keep the methane waste rule and protect our health and clean air.

READ MORE: Trump Admin Just Lost Another Attempt to Nix Commonsense Rules on Methane
Posted by Jana Segal at 9:48 AM