Add your name and help us #BootPruitt 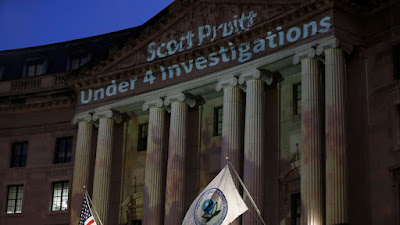 Scott Pruitt has one job to do: protect public health and the environment, literally the mission statement of the US. Environmental Protection Agency (EPA). Instead, he has been hard at work rolling back critical health protections like the Clean Power Plan, refusing to ban dangerous pesticides, and attacking clean cars standards.

On Wednesday, Pruitt appeared before the Senate Appropriations Committee to try to justify his support for defunding critical environmental programs that keep our air, water, and soil safe.

Can you take two seconds to sign this petition calling for Scott Pruitt to resign?

Since becoming EPA Administrator, Scott Pruitt has come under fire for his dirty dealings, abuse of taxpayer dollars, and efforts to undermine science and public health. Pruitt is under multiple investigations for a growing list of ethics violations.

Now is the time to fight back.

More than 170 Democratic members of Congress have called for Pruitt’s resignation. Civil rights groups like the NAACP and dozens of environmental groups have joined the fight.

Americans deserve an EPA administrator who upholds the mission of the EPA. Will you add your name and help us #BootPruitt?

Not on our watch will we let Scott Pruitt dismantle our clean energy progress while threatening the health and well-being of our kids and communities.

-The Green For All team
Posted by Jana Segal at 3:20 PM