No more excuses: Time for Scott Pruitt to go! 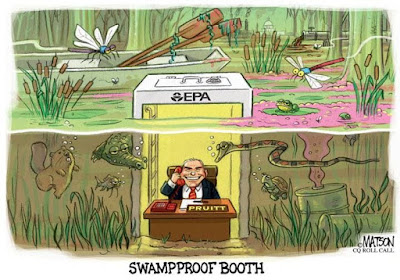 Scott Pruitt has no business leading the Environmental Protection Agency (EPA) and it’s time for him to resign or be fired. The shocking ethics violations now making headlines are just the latest in a long string of unacceptable behavior from this fossil-fuel funded climate denier.

We've known for a long time that Scott Pruitt needs to go, but now we may actually be able to get rid of him. It’s hard to keep up with EPA administrator Scott Pruitt’s mounting scandals. Now, four top aides of Pruitt’s have resigned, and many wonder when Pruitt will follow their lead.

Scott Pruitt is facing over a dozen ethics investigations and the drumbeat of voices calling on him to leave his post is growing by the day — including at least 190 members of Congress who have now publicly called for Pruitt to resign or be fired and hundreds of thousands of petition signers across the nation.

We must keep the pressure on: Add your voice to the growing calls for EPA administrator Scott Pruitt to resign or be fired — immediately.

Pruitt could very soon be added to the growing list of ousted Trump administration officials, but that will only happen if we keep making noise and don't let up.

We know that Pruitt got a sweetheart condo rental deal from an energy lobbyist, sidelined anyone who questioned his actions, and wasted millions of taxpayer dollars on luxury travel, round-the-clock security, and unapproved raises for his favorite staff members. Yet, even with the scandals mounting, President Trump said Pruitt is doing "a great job."

That's because Pruitt is carrying out Trump's disastrous fossil fueled climate denier agenda. Pruitt has been working overtime to pad the pockets of fossil fuel executives: slashing regulations, rigging the system for polluters, rolling back climate protections, undermining science, and promoting the toxic agenda of the fossil fuel industry.

Add your voice: Scott Pruitt’s extreme anti-science, anti-environment, climate-denier agenda is a danger to the American people — and his dirty dealings and unethical conduct are unacceptable. It's time for him to go.