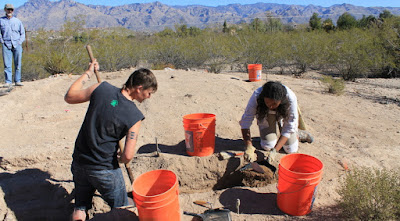 According to the Grand Canyon Chapter of the Sierra Club's legislative update:

HB2498 historic preservation; rangeland improvements; requirements (Cook: Barton, Bowers, et al.) passed out of the Arizona House 31-28-1. It weakens protections for cultural resources by allowing those with minimal training to provide the required review. Representative Cook's comments to muscle this through at the end were pretty offensive. He basically said Arizona was focusing too much on the tribal history. Now that is some revisionist history, for sure. This bill should be on the Governor's veto list! Take action now!

I personalized the Sierra Club's message to Governor Ducey by adding a paragraph of my own.  You can submit your own message to the contact form on the Governor's website:

One of the biggest booms to Tucson's economy has been the increased tourism created by its designation as a City of Gastronomy. Tucson is the first place in the United States to be honored with the City of Gastronomy designation. One of the reasons is because Tucson is the longest continually cultivated location in the United States (4,100 confirmed years of agriculture here in the Tucson basin.) How do we know that? Because of the archaeological finds near the Santa Cruz. Tucson has profited greatly from those and other archaeological finds. We can't leave future discoveries in the hands of amateurs.

HB2498 is opposed by many tribal nations and archaeologists throughout Arizona. The bill requires a so-called streamlined cultural resource protection report relative to ”rangeland improvement projects,” which could include roads, fences, and more. This bill allows people with little experience or training to provide these reports, putting at risk cultural resources.

It is not always easy to recognize important historic and cultural sites, which is why there should be someone who is well-trained to do so performing the work and issuing the reports.

Thank you for considering my comments

(Your name and location here)

For fun and inspiration, read more:

6 Things Archaeologists Discovered In Arizona That May Surprise You
Posted by Jana Segal at 7:58 AM