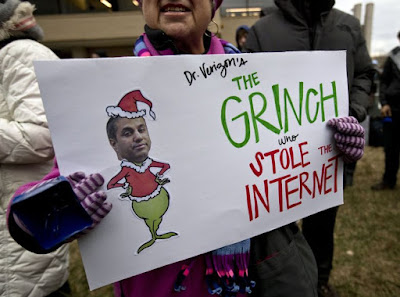 But all’s not lost! Every day more corners of the web are rising up to save the free and open internet. We can still stop Pai and protect net neutrality. Here's what you need to know and what you can do right now:

NEXT WEEK, the Senate will vote on a resolution under the Congressional Review Act to stop Ajit Pai and the FCC, and restore net neutrality protections. With net neutrality rules set to end next month, it’s critical we do everything we can to make sure the Senate passes this resolution.

That’s why we’re planning a massive day of protests on Monday, May 14 at the offices of members of Congress who haven’t signed on to the CRA yet to save net neutrality.

This protest is being planned in response to the upcoming Senate vote on the Congressional Review Act (CRA) resolution to save net neutrality. Congress needs to hear from us before they vote on the CRA resolution in mid-May. RSVP now to let your local net neutrality organizer know that you can make it, and we’ll send you a protest guide and invite you to participate in an optional training call with Team Internet staff and volunteers before the protest.

The CRA resolution is Congress’ ONLY chance to overturn the FCC’s repeal and save real net neutrality rules for all—and in order for the resolution to pass the Senate and make it to the House, we need 51 senators to vote on our side. Right now, 50 senators are publicly supporting the CRA. We are going to protest outside as many Senate and House offices as possible because if we make it past the Senate vote, the battle quickly shifts to the House.

Big Cable’s lobbyists will stop at nothing to keep senators in opposition to the resolution, so we have to show up in mass numbers to make sure that our lawmakers know that we expect them to support real net neutrality rules by voting for the CRA. RSVP now!

Join the protest on Facebook to easily connect with other activists and help plan the event:

Note: By choosing to attend this event, you are committing to participate non-violently and in accordance with the law, to work to de-escalate confrontations with others, and to obey the orders of authorized event marshals and of law enforcement. You also acknowledge that you are solely responsible for any injury or damage to your person or property resulting from or occurring during this event, and that you release all event sponsors and organizers (and their officers, directors, employees, and agents) from any liability for that injury or damage.
Posted by Jana Segal at 9:50 AM