PUBLIC COMMENT TIME: Stop Pruitt from limiting the use of science at the EPA. 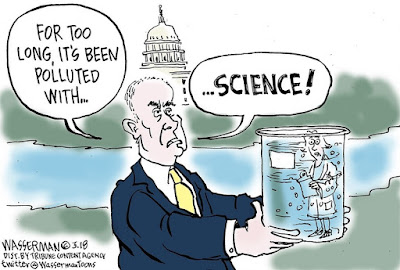 Under Scott Pruitt’s proposed rule, the EPA would rely on limited information and develop weaker protections.

Everyone depends on the science used by the Environmental Protection Agency. Because of it, we breathe healthier air, eat less-toxic food and drink safer water.

But now the Trump administration has proposed another rule that would upend the use of science at the EPA and could gut air pollution standards, limits on pesticides in food, protections from lead and more.

We need you to tell EPA Administrator Scott Pruitt not to restrict the science the agency considers when it adopts standards that are supposed to protect our families and communities.

Administrator Pruitt and his cronies want to rewrite the rules so the EPA can ignore peer-reviewed health studies that rely on confidential information, such as study participants’ identifying characteristics and personal medical histories, and medical providers’ reports on how chemicals in our air, water or food harm these individuals.

If Pruitt gets his way, polluting industries could use confidential data to intimidate people. In North Carolina, the powerful Pork Council tried to bully researchers into providing data that could reveal the identities of people who participated in a study of the health effects of living near industrial hog operations. Releasing that information would have destroyed the trust vital to public health research. But Pruitt wants to force researchers to choose between breaking promises made to study participants and conducting research that supports public health.

To make matters worse, the proposal would give Pruitt full control to decide what scientific findings the EPA can rely on and what well-supported findings the agency will ignore.

Tell Scott Pruitt to stop the EPA attack on science and our public health.

Pruitt knows that his proposal would make a mockery of the EPA’s duty to protect public health, so he’s trying to ram it through. He gave the public just 30 days to comment—and time’s up on May 30. Pruitt knows that purposely ignoring crucial science cannot stand up to public scrutiny.

Make your voice heard. Tell Scott Pruitt to stop ignoring the science and let him know why public health protections matter TO YOU.  (Please, consider personalizing the comment below to keep Pruitt from throwing it out as form letter.)

If the EPA doesn't believe in science, what is it good for?

Like all Americans, I depend on the science the Environmental Protection Agency uses to protect my health and the health of my family and community. Science supports limits on air pollution, pesticides in food and more.

Your proposed rule, which would place unprecedented limits on the use of science at the EPA, would prevent the agency from using the best science. The EPA should not create a false conflict between violating the privacy of the people who participate in research studies and protecting the public’s health.

Furthermore, you have provided just 30 days for the public to comment on the rule. This is highly inappropriate for a radical proposal that would upend the agency’s use of science.

I urge you to abandon the proposal. Our country deserves to have air that is clean for all, water that is safe for all, and food that is free of toxic chemicals.