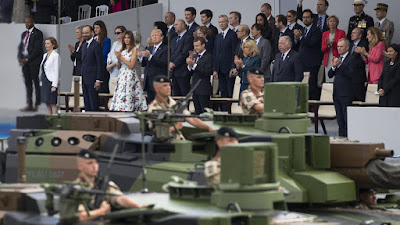 While the GOP fights tooth and nail to cut funding for food for children (SNAP), they are supporting Trump's $30 million dollar military tank parade!  Republicans in Congress are trying to make it happen — today.


Tucked quietly into the middle of a 721-page-long bill, House Republicans are trying to change the law so Donald Trump can have his tank parade in Washington, D.C. Later today, the House Armed Services Committee is going to be considering whether or not to go along with this plan. Your member of Congress, Rep. Martha McSally, is on this powerful committee, and they need to hear from you now.

Once you’re connected, tell them your name, that you’re one of their constituents and that you strongly oppose Donald Trump’s tank parade and support Rep. Marc Veasey’s amendment to the National Defense Authorization Act to stop the parade!

2) Use the Congressional Review Act to reverse the FCC’s decision to end net neutrality.

Be sure to give the staffer your name, location and zip.


If you can't reach a staffer there, try: