Break the internet, so we can save it! Tuesday 12/12 #SAVENETNEUTRALITY #STOPTHEFCC 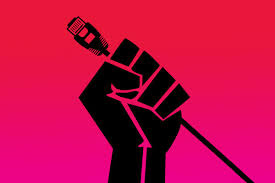 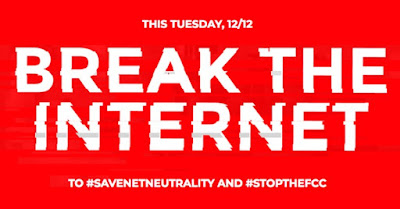 The FCC will vote to kill net neutrality this Thursday, but Congress can stop them. We have good intel suggesting there are Republican lawmakers close to speaking out to stop the FCC in Arizona and we need to activate local people interested in net neutrality to help make that happen. You can help by visiting BattleForTheNet.com and sharing it with your friends.

Comcast, Verizon and AT&T want to end net neutrality so they can control what we see & do online. They want to gut FCC rules, and then pass bad legislation that allows extra fees, throttling & censorship. But Congress can put a stop to all of this. Write Congress first, then call, then join our day of action December 12th! 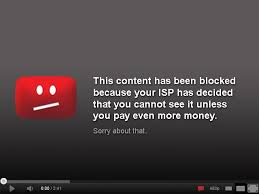 I urge you to stop the FCC's plan to end net neutrality *before* the FCC's December 14th vote.

I don't want ISPs to have the power to block websites, slow them down, give some sites an advantage over others, split the Internet into "fast lanes" for companies that pay and "slow lanes" for the rest, or force me to buy special "tiers" to access the sites and services I choose. But that's exactly what the FCC plan would do. Please read it:

Blocking & throttling by ISPs is a serious problem. Comcast has throttled Netflix, AT&T blocked FaceTime, Time Warner Cable throttled the popular game League of Legends, and Verizon admitted it will introduce fast lanes for sites that pay-and slow lanes for everyone else-if the FCC lifts the rules. This hurts consumers and businesses large and small.

If some companies can pay ISPs to have their content load faster, startups and small businesses that can't pay those fees won't be able to compete. This will kill the open marketplace that has enabled millions of small businesses and created America’s 5 most valuable companies. Without strong net neutrality protections, Internet providers will effectively be able to impose a tax on every sector of the American economy.

Moreover, under Chairman Pai's plan, ISPs will be able to make it more difficult to access political speech that they don't like. They'll be able to charge fees for website delivery that would make it harder for blogs, nonprofits, artists, and others who can't pay up to have their voices heard.

If the FCC passes their current order, every Internet user and business in this country will be unprotected from abuse by Internet providers, and the consequences will be dire. Please publicly support net neutrality protections by denouncing the FCC's current plan. Do whatever you can to stop Chairman Pai, to ensure that businesses and Internet users remain protected. Thank you!

Want to do more? Join the online protest Dec. 12th!

The FCC is about to vote to end net neutrality—breaking the fundamental principle of the open Internet—and only an avalanche of calls to Congress can stop it. So this Tuesday, December 12th, Break the Interneton your site, on Twitter, on Youtube or in whatever creative way you can, to get your audience to contact Congress.

That’s how we win. Are you in?