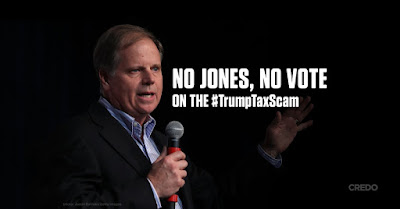 Doug Jones was elected to represent Alabama in the US Senate on December 12, 2017—but he won’t be seated until early January. The people of Alabama deserve to have their duly elected Senator vote on the Tax Scam, not a lame duck Senator appointed by a Governor that resigned in disgrace.
Remember: this is a bill that repeals a key feature of the Affordable Care Act, leaving 13 million more people uninsured and spiking premiums an extra 10%. It gives huge tax cuts to the wealthy and corporations while RAISING taxes on 83 million families. And it adds $1 trillion to the deficit, which will force deep cuts to Medicaid, Medicare, Social Security, and more down the road.
The Tax Scam is currently being finalized by the “Conference Committee,” a group of members from the House and Senate that are resolving the differences between the House and Senate bills. Both the House and Senate have to take one more vote on the final version of the bill that the Conference Committee produces. Your Senator should refuse to cast a final vote on the Tax Scam “conference report” until Doug Jones is seated. Call them at 1-855-980-2350 today.

Caller: Hello! My name is [___] and I’m calling from [part of state]. I want [Senator] to refuse to take a final vote on the Tax Cuts and Jobs Act until the new duly-elected Senator from Alabama is seated.
Staffer: Senator [___] is in favor of the Tax Cuts and Jobs Act and thinks the American people can’t wait to reform our broken, complex tax code. There is no need to wait until the New Year to vote on it.
Caller: That’s terrible. The people of Alabama deserve to have their voices heard and be represented by the Senator they elected. Keep in mind that [Senator] helped Mitch McConnell keep a Supreme Court seat vacant so that “the people could decide.” Well, here the people have decided and their will should be respected. After Scott Brown was elected in a special election in Massachusetts, there were no further votes on the Affordable Care Act until he was seated. That’s the approach [Senator] should follow here.
Staffer: Thank you. I’ll let the Senator know your thoughts.
Caller: Yes please do, and please take down my contact information so you can let me know what the Senator decides to do. He/she can do the right thing with his/her vote alone. I will be watching to see that he/she does.
- Indivisible
Posted by Jana Segal at 7:01 AM