Tell your Senators: Refuse to cast a final vote on the Tax Plan “conference report” until Doug Jones is seated 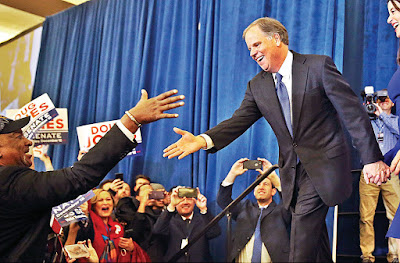 Now that the Tax bill has gone through committee, they are trying to rush it through a vote before Dem. Doug Jones is sworn in. Contact your senators immediately.  1-855-980-2350

Hello! My name is [___] and I’m calling from [part of state]. I want you to refuse to take a final vote on the Tax Cuts and Jobs Act until the new duly-elected Senator from Alabama is seated. The people of Alabama deserve to have their voices heard and be represented by the Senator they elected. Keep in mind that Republican senators helped Mitch McConnell keep a Supreme Court seat vacant so that “the people could decide.” Well, here the people have decided and their will should be respected. After Scott Brown was elected in a special election in Massachusetts, there were no further votes on the Affordable Care Act until he was seated. Please, refuse to cast a final vote on the Tax Plan “conference report” until Doug Jones is seated.

https://www.flake.senate.gov/public/index.cfm/contact-jeff
Posted by Jana Segal at 9:29 AM