Do or die effort to stop #GOPtaxcam 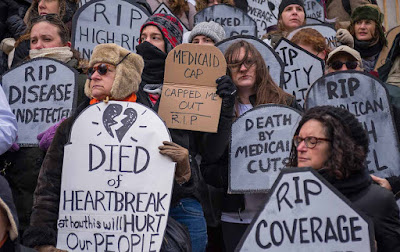 In the dead of night last Friday, all but one Senate Republican voted to approve their version of the cruelest, most economically destructive tax bill in recent memory. Now the bill, which attacks the Affordable Care Act (ACA) in addition to raising taxes on millions of working people and families while giving tax cuts to corporations, and the super-rich (not to mention sacrificing our Arctic National Wildlife Refuge), heads back to the House for conference.
That means we have another chance to fight back. If we can flip at least 11 of the House members who voted for the House version of the bill, we can stop this bill. Many reports indicate that call volumes still haven’t reached the high levels Congress received during the ACA fight; we simply have to flood our representatives with calls, emails, and visits so they understand the potential consequences of selling out most of their constituents for the benefit of their wealthiest donors.
Posted by Jana Segal at 12:27 PM