Tell the Trump administration: No uranium mining in the Grand Canyon

The petition to the Trump administration reads:
"Do not open the Grand Canyon to new uranium mining leases."
Add your name:
Trump has declared war on our national monuments, and it doesn't stop with slashing the size of the irreplaceable Bears Ears and Grand Staircase monuments. It’s just as unbelievable that we now have to protect one of America’s most precious national treasures – the Grand Canyon – from something as dangerous and destructive as radioactive uranium mining. But that’s exactly what we have to do right now.
Thanks to an executive order from Donald Trump, the U.S. Forest Service has taken the first step toward ending a 20-year moratorium on uranium mining in the Grand Canyon watershed. Uranium mining would threaten ancient forests, Native American communities and the Colorado River – a source of drinking water for millions.
We must push back now on this dangerous and misguided proposal.
Tell the Trump regime: Don't allow destructive uranium mining near the Grand Canyon. Click here to sign the petition.
This March, Trump signed an executive order telling federal agencies to review their rules to find ways to allow more destructive oil drilling, natural gas fracking, and coal and uranium mining. In response, the U.S. Forest Service has proposed ending a ban on uranium mining in and around Grand Canyon National Park.1 The Obama administration enacted a moratorium in 2012 that was intended to last for 20 years, but now the Trump administration could lift the moratorium at any time.
Uranium mining would threaten the land, water and communities around the Grand Canyon. The Havasupai Tribe, who live at the bottom of the canyon, use water from the canyon's seeps and springs to water their beans, corn, melon and other crops.2 Mining around the canyon could release uranium pollution into the groundwater, threatening the Havasupai community's health for generations.
We know how destructive uranium can be. On the nearby Navajo Nation, where mining companies have blasted 4 million tons of uranium from more than 500 mines, the Centers for Disease Control and Prevention has found uranium already present in newborn babies.3 Uranium exposure is linked to lung cancer, bone cancer and impaired kidney function, all of which have plagued Navajo people around the mines.4
Uranium mining in the Grand Canyon could also threaten the health of people hundreds of miles away. The Colorado River, fed by the watershed, supplies water to 40 million people in Los Angeles, Las Vegas, Phoenix and other cities.5 It is unconscionable to risk human health by re-opening the Grand Canyon to mining uranium.
Tell the Trump regime: Don't allow destructive uranium mining near the Grand Canyon. Click here to sign the petition. 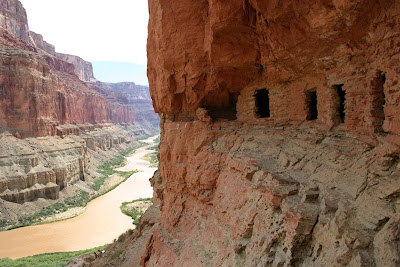 The Forest Service has admitted that the federal government will receive no revenue from any uranium mining that happens. Rather than saving money, reversing the ban on mining would actually force taxpayers to shell out funds for pro-mining studies.To get rid of the ban, the administration would have to undertake environmental studies that try to refute the scientific findings that uranium is harmful to local wildlife and communities.6
The Grand Canyon ecosystem is unique and incredibly complex. The Obama administration enacted a 20-year ban in part because 20 years is the estimated time required to complete an Environmental Impact Statement on such a large-scale ecosystem.7 Now the Trump administration wants to barrel ahead without any understanding of the harm that could be caused.
Tell the Trump regime: Don't allow destructive uranium mining near the Grand Canyon. Click the link below to sign the petition:
https://act.credoaction.com/sign/save-grand-canyon?t=8&akid=26368%2E3130208%2EzdV-vs
- Brandy Doyle
CREDO Action
Add your name:
References:
Posted by Jana Segal at 10:18 AM