Tell the Unity Commission: Return the Democratic Party to the people. No more superdelegates! 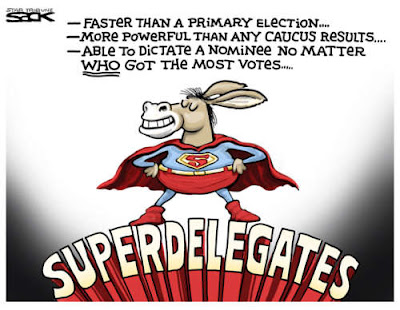 The DNC Unity Commission was created in the aftermath of the 2016 primary to address serious concerns over the fairness and impartiality of the Democratic presidential nominating process.

Demand Progress has been fighting for over a year to eliminate superdelegates, and return the power of choosing a presidential nominee back to voters and grassroots activists where it belongs.

We’ve reached a critical moment to get rid of superdelegates for good. On December 8, the Unity Commission will meet and make recommendations to the full DNC about the future of superdelegates.

Tell the Unity Commission: Return the Democratic Party to the people. No more superdelegates!

Superdelegates are party insiders, elected officials, and big donors who get to vote on the Democratic Party’s presidential nominee. They represent no one but themselves, and can cast their vote for whoever they want at the party’s nominating convention. Even if the state they are from overwhelmingly voted for a particular candidate, they can vote for whoever they want, essentially canceling out the votes of thousands of people.

Party insiders would like nothing more than for the Unity Commission to quietly kill reforms to the primary process, and they’re counting on activists like you and me to have short memories.

That’s why we need to get as many signatures on this petition as possible. The DNC needs to know this issue is not going away and that activists demand change. If we win strong recommendations to end superdelegates out of the Unity Commission, it will be much harder for the DNC to kill them at their meeting in February.

Democrats won an impressive number of local and state races in 2017 through deep organizing and platforms that spoke to the concerns of grassroots activists and rank-and-file voters.

We must keep the momentum going by ensuring the Democratic Party can present itself as a credible alternative to Trump and the Republican Party with a bold, economic populist agenda that refuses to divide Americans based on bigotry and fear.

Eliminating superdelegates will start the 2020 nominating process on the right foot by returning the choice of presidential nominee to primary voters.

Tell the Unity Commission: The people should choose the nominee, not party insiders. Eliminate superdelegates!

- Carli and the Demand Progress Team
Posted by Jana Segal at 9:41 AM