Sen. Sanders: This Tax Bill Will Be Remembered As One Of The Greatest Robberies In American History 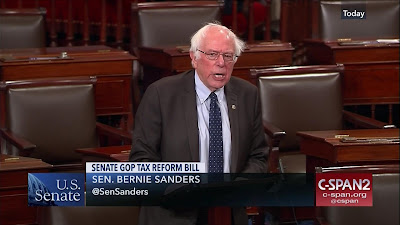 Watch video: Sen. Bernie Sanders stood up for the American People about this criminal bill.

I believe that historians will look back at the early morning hours of Dec. 2, 2017, and conclude that it was one of the great acts of thievery in the history of the United States.

Let me be very clear about what is happening here. It is an extraordinarily cynical "two-step" process. First, Republicans are looting the Treasury. They are stealing trillions of dollars from the American people in order to give huge tax breaks to billionaires and large corporations. Second, as their tax breaks increase the deficit by $1.4 trillion, they will come back and, in the name of "deficit reduction," propose major cuts to Social Security, Medicare, Medicaid, education, nutrition, affordable housing and other programs desperately needed by the shrinking middle class.

This is class warfare, led by the Koch brothers and other wealthy Republican campaign contributors. More for the rich. Less for working families. Our job now is to stand up and fight back. 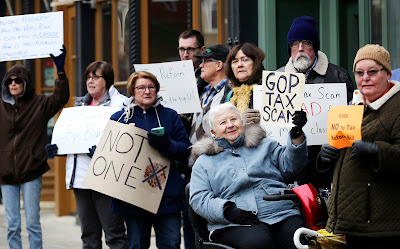 That is why last weekend I spoke to large crowds in Louisville, Kentucky, Dayton and Akron, Ohio, and Reading, Pennsylvania. Over 5,000 people took time out of their weekend to attend these high energy meetings in person and almost one million watched on-line. At these rallies activists heard not only from me, but from working people, DREAMers, nurses, Planned Parenthood patients and others about how this tax bill would negatively impact them, their kids, their parents and the future of our country.

Everyone made it absolutely clear that we need to keep fighting against this disastrous piece of legislation and not stop until we defeat it.

This legislation now goes to something called a "conference committee" where the House and Senate work out the differences between their respective bills. Then, the bill comes back for final passage. That means we probably have about three or four weeks to educate and organize the American people to defeat this dangerous bill. Please, get on the phone to your House and Senate members. Email them. Spread the word to your friends by social media. Talk to your co-workers. In the midst of massive income and wealth inequality, this country does not need more tax breaks for billionaires.

I will not stop until we defeat this disastrous piece of legislation. But I cannot do it alone.

Here's a good summary of the Tax bill from Bernie.

We can help Bernie by getting the word out any way we can and by contacting our members of Congress.

Here's another way to contact our members of Congress about the Tax Bill:

Arizonans, here's an easy way to tweet our Senators about the #GOPtaxscam
Posted by Jana Segal at 10:28 AM