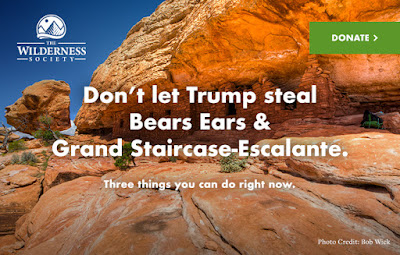 Trump just made it official. Minutes ago, during his first trip to Utah as president, he announced massive cuts to Bears Ears and Grand Staircase-Escalante National Monuments.
The reductions are widely assumed to be a way to open more of these priceless landscapes to mining and drilling. Bears Ears' boundaries will be shrunken by a staggering 85 percent. Grand Staircase-Escalante will be sliced in half. The largest rollback of protections in history with more than 2 million acres total erased. His illegal actions might not stop there with many other national monuments rumored to be next.
The stakes have never been higher. Here are three things you can do right this minute to fight back:
(Note from Desktop Activist Tucson: As a rule, I don't post fundraising calls. I'm making an exception here because the Wilderness Society needs the money to take Trump to court. And that may be our best chance to save our National Parks. We can't let him set a precedent of legally dismantling our national parks. )
- The Wilderness Society
Posted by Jana Segal at 12:20 PM