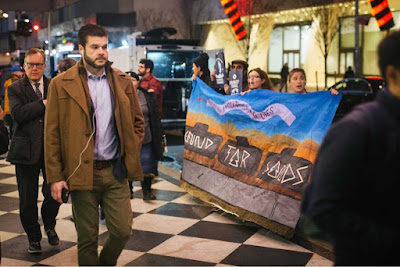 JPMorgan Chase has got to be feeling the heat, because you answered the call to action! Over 2,000 of you called JPMorgan Chase to tell them to #defundtarsands and to cut ties with TransCanada, the company behind the Keystone XL pipeline.
And yet, late on Friday, JPMorgan Chase and 18 other banks renewed their support for TransCanada by extending two credit facilities totalling $1.5 billion. As the lead bank on both of these loans, JPMorgan Chase continues to provide TransCanada with the money it needs for its business, including its headline project, Keystone XL. This is unacceptable — but we knew this fight wouldn’t be easy.
JPMorgan Chase is a leading funder of TransCanada — and the #1 Wall Street bankroller of tar sands oil, one of the dirtiest fossil fuels on the planet. They are the biggest bank on Wall Street, and their investments in tar sands and extreme fossil fuels run deep. It’s going to take sustained people power and continued actions from this incredible network to move this corporate giant away from fossil fuels and towards honoring Indigenous rights and climate stability. Persistence is how we win.
Since the Nebraska decision that re-routed TransCanada’s Keystone XL pipeline, almost 45,000 people have signed the petition to JPMorgan Chase, demanding the bank stop funding TransCanada.


On top of all that, on December 7 a small group of water protectors made their way to The Plaza Hotel in New York City to the Wells Fargo Thought Leadership Forum, an exclusive gathering of over 1,000 of the world’s largest investors. The water protectors attempted to deliver the petition with your signatures to Jamie Dimon, JPMorgan Chase’s CEO. These peaceful activists were forcibly ejected — but our collective message was heard loud and clear: NO KXL. Defund tar sands.
When more than 2,000 of you called JPMorgan Chase’s head business office and customer service line, here are some of the things you said:
We’re going to have to keep speaking up, because this fight to stop the KXL pipeline is far from over. TransCanada is expected to make their final investment decision this month, formally deciding whether or not to move forward on the project — read more about what that means here. RAN intends to intervene at every key financial decision point to demand that JPMorgan Chase cut ties with TransCanada and end funding for tar sands.
-Ruth Breech, Rainforest Action Network
Posted by Jana Segal at 7:14 AM