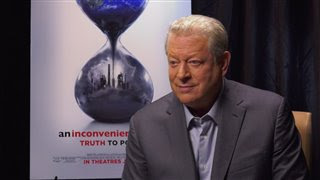 A decade after An Inconvenient Truth brought the climate crisis into the heart of popular culture, comes the riveting and rousing follow-up that shows just how close we are to a real energy revolution. Former Vice President Al Gore continues his tireless fight, traveling around the world training an army of climate champions and influencing international climate policy. Cameras follow him behind the scenes — in moments both private and public, funny and poignant — as he pursues the inspirational idea that while the stakes have never been higher, the perils of climate change can be overcome with human ingenuity and passion. Learn more about An Inconvenient Sequel: Truth to Power here.

Here are Al Gore's thoughts on how things are going in the fight against global warming:

The environmental movement has made such great strides in recent years. We’ve developed new, cleaner energy sources, and lots of people are now taking action to stop the worst of global warming. I've always believed we can turn this thing around, but it's going to take us all pulling together.

Having been through presidential elections, both as a candidate and as a concerned citizen, this last one was the worst yet for the climate. Donald Trump is doing everything he can to undo the progress we’ve made together in recent years, even pulling the U.S. out of the Paris Climate Agreement. We’re seeing extreme weather events every night on the news. Sadly, we only have to look around at what’s happening with damaging flooding caused by global warming induced storms, record breaking temperatures around the globe, wildfires, and the melting ice caps in the Arctic to know this is not theory — this is reality.

But I'm not giving up and neither should you. I've been working hard on my new movie, An Inconvenient Sequel: Truth to Power. In the movie, we share inspiring stories about the renewable energy revolution that’s already under way. I hope everyone who comes to see it will leave knowing that while the stakes have never been higher, the perils of climate change can still be overcome when we combine brain power with people power.

There’s a lot we can do, and must do. I know it can seem overwhelming. So please, just commit to doing these two things right now and we’ll go from there.

1. Greenpeace and a lot of other good folks in the growing global environmental movement are coming together in the court case “People vs. Arctic Oil.” They’re taking the Norwegian government to court because it’s opening up new areas of the Arctic for oil drilling — for the first time in 20 years — while burning oil is a primary cause of climate change. What happens in the Arctic affects us all. Please use your voice and take a stand on climate change by clicking here to add your name to the movement against Arctic oil. Your signature will be presented as evidence in the Greenpeace case.

2. You may know someone who’s on the fence about climate change. In this era of “fake news” it’s hard for people to know what to believe. Instead of dismissing that person, why not reach out to them and offer to go see An Inconvenient Sequel: Truth to Power, together? Maybe even share your popcorn with them. For a limited time, Greenpeace supporters can bring a friend for free. Go to Fandango.com and enter the promo code CLIMATEBOGO at check out and share the film with someone who needs to see it.*

I hope you’ll join us by signing the petition and bringing a friend to see An Inconvenient Sequel: Truth to Power.